Swimming with the elephants A young elephant named Mali has been unable to poop all day. Apparently, her handler allowed her to have a few too many bananas the day before and she was totally bunged up. As I sit here quietly writing in my journal (I type it into my blog later) a vet has his arm up her bum along with a water hose trying to get things moving.
All of the other tourists have left Elephant Haven. We are the only guests who chose the overnight package. According to Koon, our main host, there are usually two to four guests every night at this time of year. 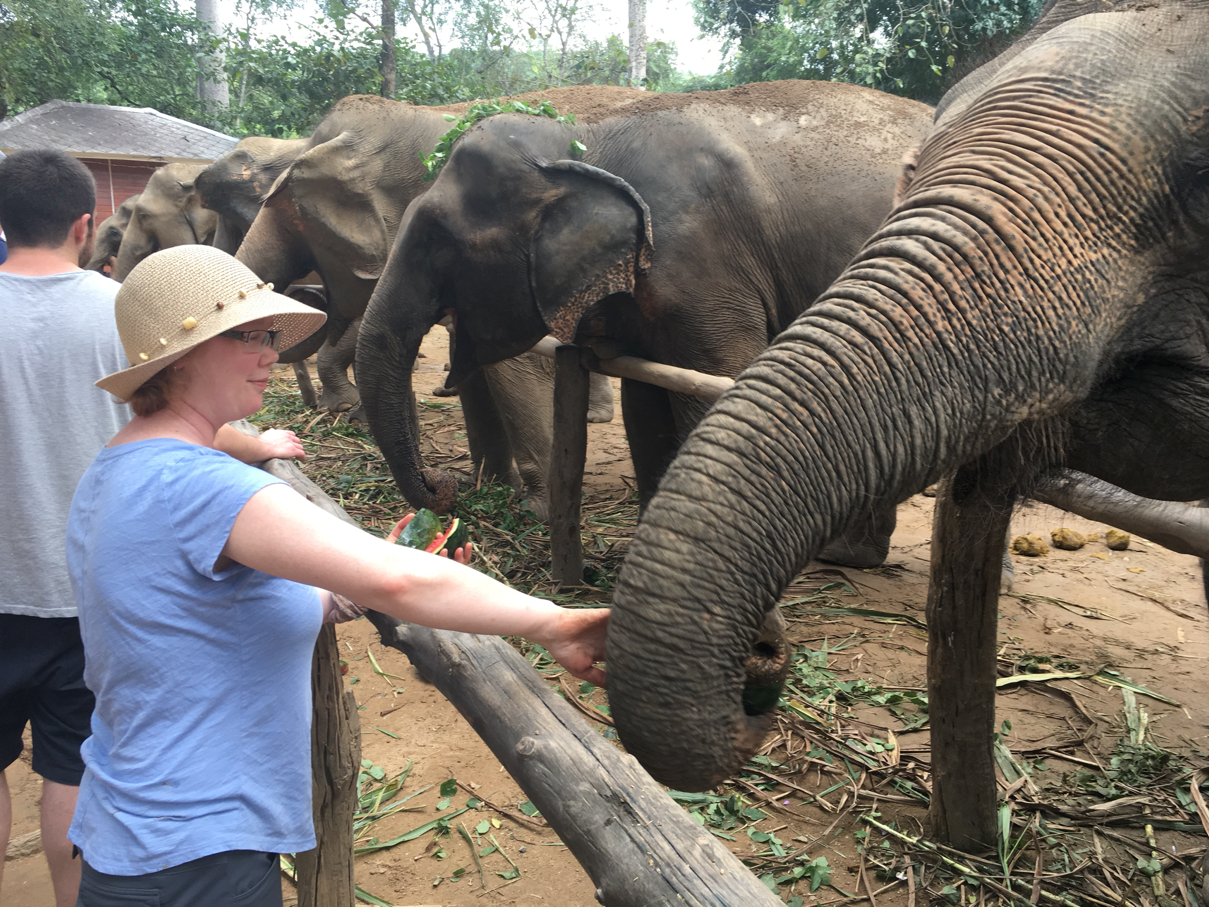 There are seven elephants here ranging in age from 25 to over 60. Thongkoon, the eldest, doesn’t see so well, one eye has a serious cataract. In front of me are chickens roaming freely. Above me is a solitary mynah bird sitting up in the rafters, waiting to launch its next poop bomb. Heather is in our cabin, writing a blog post using her iPad. It is better accommodations than I imagined. We have a comfortable bed with a private bath and shower, plus access to WiFi.
Our day started with feeding the elephants: shoots of sugar cane followed by rice balls and chunks of pumpkin and watermelon. They grab each using their dexterous trunk, maneuvering whatever is being offered into the optimal position to launch it into their mouth.  The crunch of their powerful Jaws follows - they eat about 10-percent of their body weight every single day.
These are rescued elephants. In their working lives they were poked, prodded, ridden and stripped of their spirit. They were featured in movies, circuses, side shows and used as trekkers (tourists would pay big money to ride them). They were “tamed” at a very young age , forced to fall into line, and treated very poorly. The elephant you have seen painting lovely picture on YouTube; she was one of them. She was trained to making those creations; she was not a wondrous freak of nature with a startling eye for colour and composition.
These elephants have been retired to Elephant Haven. Each day they get fed, walked, and watered. They take mud baths and go swimming in the river. They get the medication and love they need to experience happiness. Each has a mahout (elephant handler), several of whom are shown below, lovely Thai gentlemen with great caring hearts and a deep connection to their elephant. This project is connected to the larger elephant sanctuary in Chiang Mai.  It is one of several that has popped up in countries like Laos, Myanmar, and Cambodia.
Our visit, along with so many others, helps sustain the operation and take care of these beautiful animals. After some rest, Koon took us for a brief tour of the Death Railway and a cave that the Japanese used as s bunker during allied air raids during WWII.
To get there, we rode in the back of a flat bed truck. We have touched base with almost all forms of transportation on this trip so far.
Down below, on the other side of the river, was where one of the largest POW camps was located.
Today, it is one of the largest resorts in the area. Apparently, we were gifted with a rare treat as we got to walk the tracks with a lovely group of monks. We enjoyed a tasty traditional meal as the sun set and all the bugs came out. Yes! There are mosquitos in Thailand. All we needed to do was to take two small steps away from civilization to find them.
Email Post