I love painting moments, slices of history when subjects are captured in the middle of a thought, action or encounter.  It provides a much richer emotional well to draw from as the artist when exploring a moment, as opposed to doing a traditional portrait, where the subject is looking forward with the express purpose of posing.

Here are a few examples. 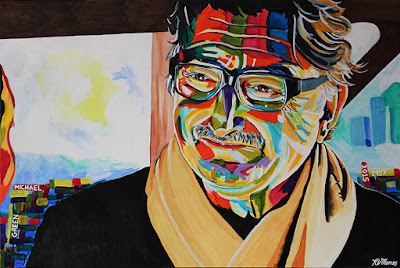 I met Michael Green, co-founder of One Yellow Rabbit theatre company in Calgary, at The Gathering, an event put on by Suncor where they brought together many nonprofit partners from across Canada to dive into a number of different social issues.  We were enjoying a social event in the foothills south of Calgary at a ranch of some kind.  We were in a large old barn that had been turned into a catering facility waiting for the meal to be served.  I looked up and saw Michael standing in this most beautiful light chatting with someone.  I couldn't resist.

"Michael," I said.  "Do you mind if I take your picture?  You are in the most beautiful light right now."

"Sure," he said, as he continued his conversation.

Short months later, he was killed in a horrific collision with four other people.  The photo, and eventually this portrait (featured in The Globe and Mail), were widely used to celebrate his life.  Standing in the light of the sun as it was setting beyond the majestic mountains, Michael seemed perfectly at peace. 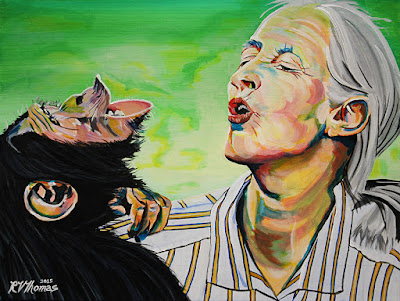 Jane Goodall is a famous primatologist and anthropologist.  She is considered to be the world's foremost expert on chimpanzees.  For over 50 years, she has studied the social and family interactions of wild chimps.  This moment celebrates her indelible connection to these wonderful animals.  Whether you focus on the chimp or on Goodall, you can't help but imagine the joy that they must have been feeling, and their depth of connection to one another. 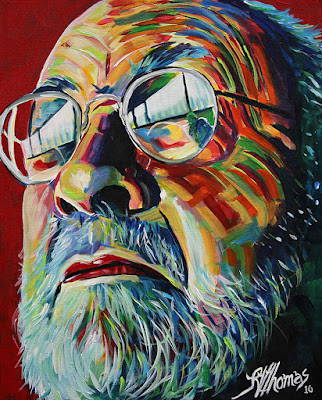 One of my favourite portraits is part of the Taylor Donald collection.  Henri Matisse was a French artist who was widely considered, along with Picasso, to have catalyzed massive developments in visual arts at the start of the twentieth century.  He also went through a fauvism period, a style of painting that some say my early works resembles or emulates.

The context of this moment can be imagined by looking at the reflection in his glasses.  Where is he?  Who is he with?  What is he thinking?  The best moments to capture are the ones that leave you guessing. 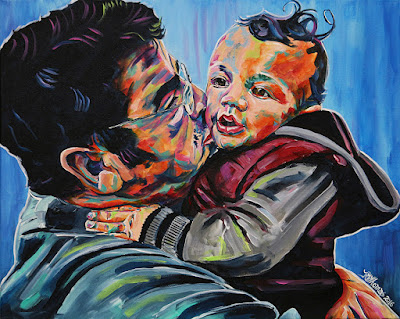 Joe had spent countless hours helping his daughter's family in the months after the wildfire, evacuation and return to Fort McMurray in 2016.  She wanted to do something special to thank him, so she asked me to paint this priceless moment with Demari, his grandson.

The tilt of Joe's head, the peaceful expression on Demari's face and the placement of his hand on his grandfather's neck, all combine to express so much love. 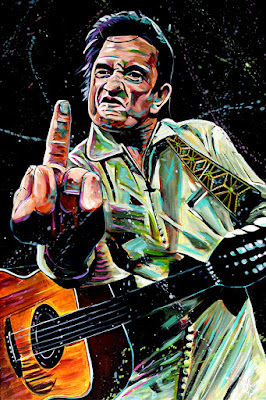 For better or for worse, this moment is one that has become iconic since photographer Jim Marshall captured it at San Quentin State Prison in 1969.  Shortly before he died in 2010, Marshall revealed that he had asked Cash to express what he thought of the prison authorities when he played the show.

The photographer shared the following with the San Francisco Art Exchange:  "I said, 'John, let's do a shot for the warden."

It was in that moment that Cash flipped the bird in the direction of the lens.

Moments yet to come

After having done over 900 paintings, as I scroll through the library of images, I am reminded of many projects and moments that had slipped from my memory.  It's fun to imagine how this collection of paintings will grow in the years to come, and the unforgettable moments that will be part of it.

If you have a moment that you'd like me to explore, don't hesitate to get in touch.  The best way is to connect with me via my Russell Thomas Art Facebook page.  The other way of getting in touch is by email: russell.thomas@birdsongconnections.com.  I'd be happy to give you a quote.