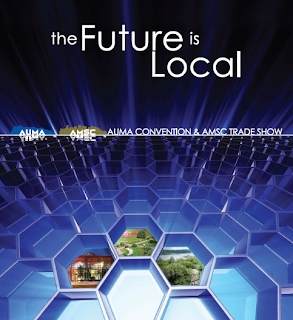 I spent yesterday in a room with mayors, councillors, aldermen, and CAOs from communities across Alberta.  We were there to talk and learn about communication plans, which we did talk about, along with a host of other realities and challenges that make me truly grateful.

Representing communities of several hundred to small cities of thousands, the range of leaders was vast.

If you had walked into the space from off the street could you have extrapolated that this was a group of politicians and bureaucrats?  No chance.  This could have been a gathering of insurance adjusters or ag producers, as far as you could tell.  Honestly, based on advice I had received about the AUMA (Alberta Urban Municipalities Association) convention, there were going to be a whole lot of suits.  Let's just say I was over dressed and ditched the suit jacket two minutes after finding my seat.

I knew the discussions were going to be fun when the guy behind me asked the facilitators, Wendy Heshka and Michelle Gurney, "What do we do about the cave people?"

Cave people, I said to myself, who the heck are they?

The flummoxed look on my face must have given me away as a nice fellow next to me leaned over and whispered "Citizens Against Virtually Anything."

"Ohhh," I said, grabbing my BlackBerry so I could tweet about the acronym I had just learned.

It became clear very quickly that some of my political colleagues are dealing with split councils that makes their lives miserable and progress painfully slow.  In one situation that shall remain nameless, errant councillors on the opposing side of an issue are spreading misinformation to try to sway the sentiments of the electorate.  In another locale, the publisher of the local paper has such a strong bias and penchant for stretching the facts that the primary means of information distribution in that community has actually become a detriment to governing.

I spent the day wrapping my brain around the question of how to integrate new or social media into the communication mix.  We live in a 24-7-365 region, but we tend to communicate in the 9 to 5, Monday to Friday, traditional media model.  Or, at least that's what we used to do.  I'm so pleased to say that we're making the transition, and many of us, including some excellent communication staff at the Regional Municipality of Wood Buffalo, are making adjustments on the fly.

There were some in the room dead set against ever participating in social media, people surprisingly young to be so reticent about this exciting form of connecting with our citizens.  Many had already taken the plunge and were swimming around trying to find the current that would carry them in the right direction down the river of progress.

"Over two million Albertans are on Facebook," said one of the hosts.  "And 1.5 million of those are of voting age."

The line that former Energy Minister Murray Smith repeated several times during our visit a few weeks ago kept rattling through my brain.

"If you want to go duck hunting, go where the ducks are."

In the radio business they talk about hours tuned.  I wonder if you were to compare the average hours tuned of particular channels across the media landscape, what channel or channels would float to the top?  My kids and I, for example, spend far more time on social media than anything else, radio, television or newspaper, in fact, more time than the last three combined together.  Yet, traditional communication philosophy and practice has organizations spending the bulk of their human resource time and marketing dollars focusing on the same stuff that they were focusing on ten and twenty years ago.  This is a new world, and the sooner we realign our priorities, the sooner we'll find the sweet spot in the communication racket.

We talked about micro-blogging (Twitter), social networking (Facebook), photo and video sharing (Flickr and YouTube) and mobile apps.  We talked about the benefits and we looked at the risks associated with making the leap into the social media universe.  I can promise you that there are myriad control issues at play and giving over control of the conversations and comments that are inherent to new media is going to take time and a fair bit of convincing in some cases.
Email Post