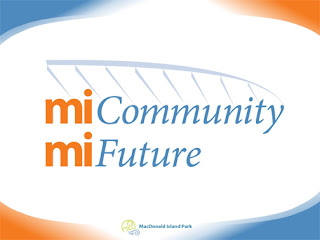 "Tim, when will we know when we are finished adding things to the Island?"

"When it sinks," replies Tim.

It's an inside joke within the miTeam (MacDonald Island Team), as maintaining the status quo, or standing still, has no meaning nor value.

Chief Operating Officer Tim Reid clearly outlined the possibilities of what lies ahead for the Island in the coming years during a public announcement/media conference yesterday morning in the front foyer of the Suncor Community Leisure Centre, a sea of red as the morning would also include the kick-off of the United Way campaign. 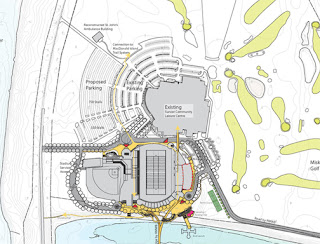 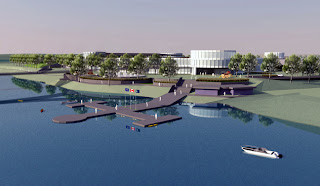 IMAGINE parking somewhere downtown and crossing an iconic pedestrian bridge across the Snye enjoying a startling view of the pristine Clearwater River Valley to the east and the majestic Athabasca River to the west. 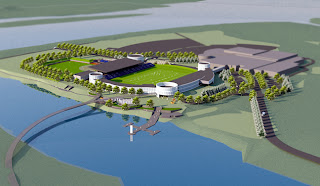 IMAGINE following the plaza into the circular entrance to the state of the art non-profit centre, home to over over 30 organizations who strengthen and maintain the fabric of our community and region. 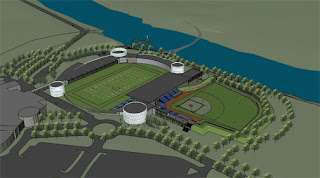 IMAGINE going up the the second level and on to the upper mezzanine, with a hard-hitting football game in progress to your right and a semi-professional baseball game happening to your left.

Imagination is a funny thing in Wood Buffalo.  If you can clearly see it in your mind chances are that it can be made reality.  The dream that is MacDonald Island Park started to form over 50 years ago, and through the work of many community builders like C. A. Knight has grown into what is currently the largest recreational facility in western Canada.  If this new expansion gets the nod later this year, we could be enjoying a hot dog and a semi-pro ball game as early as July 2013.  By the time we host the 2015 Western Canada Summer Games, this  expansion would be all built out and ready to host some of our nation's best athletes.

A home for non-profits in the heart of our dynamic downtown, facilities that will transform into special event spaces for up to 20,000, an all-weather pedway into the Suncor Community Leisure Centre, new vehicular access with an additional bridge, and a pedestrian bridge that would be an architectural wonder are all part of this incredible picture.

Dive into the details and provide your input by clicking here.

"We are the community that delivers," said Mayor Melissa Blake in her public remarks following the unveiling of the plans.  No truer words have ever been said.
Email Post