"Dierks wants to go fishing," they said.  "You're the first person who came to mind."

It's good to be known for something.  That request came in the day before yesterday as the Events Wood Buffalo crew were doing last minute advancing for Dierks Bentley and his entourage.  He was the headline performer on Day 2 of the SummersEND Country Music Jubilee in Fort McMurray, sponsored by my good friends at Royal LePage True North Realty. 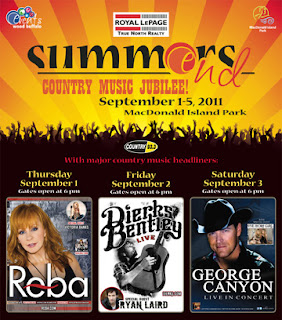 I pulled up to the backstage area at the agreed upon time when I would pick up two, maybe three of the guys to give them a taste of fishing in the north.

Krista was in the driver's seat of a big black suburban.  You know what I'm talking about, one of those big lumbering units you see in movies when they need to drive stars around.

He was lounging in the back waiting to go out for a round of golf at Miskanaw.  Though he had opted not to go fishing in the end, he had a lot of questions about what angling is like in this part of the world.

"What do you know about Mikisew Sport Fishing," he asked.  "I was looking at them online."

I gave him the big pitch about some of our celebrated northern lakes and tried to describe where they were located.

"How much of a drive is it to get out there?"

"Oh, you can't drive, you have to take a float plane."

He was pretty impressed with that.  When you stop and think about it, there probably are not a lot of spots in the US where you have to take a float plane to a lake.

I said goodbye and wandered into the artists' hospitality area to meet the two members of the band that were going fishing, bass guitarist Cassady Feasby and drummer Steve Misamore.

We went to Chow's Varieties to get them all licensed up before hitting my favourite spot along the south shore of the Clearwater River at Willow Point.

Over the next two hours they didn't catch anything, but I sense they both appreciated the opportunity to be near the water, with the hope that fish would rise.  I learned a little about life as a country music musician living in Nashville and working for one of the biggest in the business.  We talked fishing, family, and favourites - from Merle Haggard to Breaking Bad and Dexter.  It was time well spent for me, and for Steve and Cassidy, a chance to enjoy some refreshing down time watching the tip of a fishing rod along a heritage river in Fort McMurray, Wood Buffalo, Alberta, Canada.