According to Head Waiter Jason Blair, after the dust settled on the annual Harvest of Hope last night, over $270,000 was raised for the Canadian Cancer Society.

This benevolence bash has become a fixture of the fall social calendar in Fort McMurray along with marqee events like the Keyano College Foundation Gala, the Northern Lights Health Foundation's Festival of Trees, and the Kids Forever banquet, which unfortunately also occurred last night, preventing many of us from being two places at once (with the exception of auctioneer extraordinaire Ross Jacobs, who, decked out in his Nacho Libre wrestling mask, managed to weave his magic for both).

"There are so many of these things now," said longtime Regional Councillor Phil Meagher.  "When I first started on Council in the 90's we had a couple of banquets on our social calender before Christmas, but that was pretty much it.  Now, we have multiple events every weekend."

Multiple events, lots of fancy gowns and expensive tuxedos, and more generosity and bravado than you can throw a stick at, Fort McMurray has really grown up. 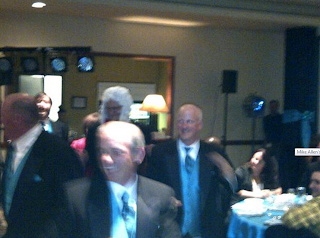 In the interest of total transparency, I'm not the best celebrity waiter in the world.  It's not that I don't like to serve, I like that part a lot, it's more that I don't have an iota of the amount of fun, creativity and drive required to inspire people to part with their money for this great cause.  That said, I was surrounded by some extraordinary waiters who raised thousands and thousands of dollars.

Marty Giles from Northstar Ford had a compelling creation draped around his neck all night, including ten $100 bills and several coveted hockey tickets.  He roved the large room and sold tickets and raised a pile of money. 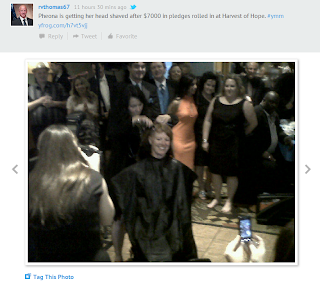 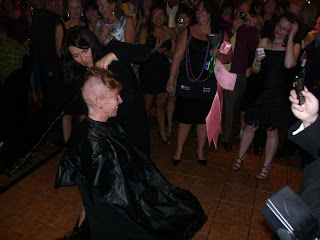 Fiona Deeney-Paradis from The Blind Spot (www.blindsfortmcmurray.com), sporting a beautiful head of hair, offered to sacrifice her coiffure if the gathered masses would donate $7,000.  It took about 20 minutes to coax the dollars out, but the grand work of emcees Ben McCully and Jerry Neville from Country 93.3 made it happen.  Fiona looked perfectly elegant and sheik as her locks fell to the dance floor, surrounded by admirers and paparazzi, earning a well-deserved standing ovation. 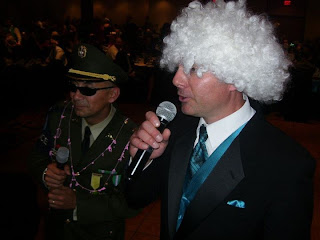 From Ali Sayed slipping from his tux into tacky 1970s garb (for lots of $$$), to Julio Florez performing a duet with Stefan of the song "To All the Girls I've Loved Before", to Ruth Francoeur being bribed to carry a baby doll on her back all night long, you just never know what's going to happen at the Harvest of Hope. 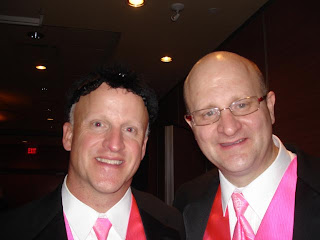 For Councillor Don Scott and I, this event is a personal marker of sorts.  We participated last year, sporting fabulous pink coloured vests, not knowing what our political futures would bring.  At that time we were in the throws of a municipal election campaign.  Things turned out well for the both of us, and in the process I'm honoured to say that we've grown into great friends.

While we were bringing out the brilliant dishes prepared by Chef Clarence and his team at the Sawridge Inn and Conference Centre, politicians at a different level were glued to their computer monitors watching the results of the first ballot in the Alberta PC Leadership Race.

"Mar is trending very strongly in the first polls coming in," I said zipping by Don, wearing his long flowing judges wig bouncing from table to table.

A little later the message changed slightly as scattered reports were coming in that it was turning into a horse race.

"Doug and Alison are starting to come up," I shared.

In the end, late into the evening, long after I had gone home, Gary Mar landed exactly where most of the pundits had placed him, at the top with 40.8% of the disappointing number of votes that were cast.  Alison Redford came in a solid second with 18.7% with Doug Horner bringing up the rear of those that will appear on the second ballot with 14.5%.  Ted Morton, Rick Orman and Doug Griffiths were left to console their campaign teams and release the over 15,000 votes to be dispersed among the other candidates on October 1st. 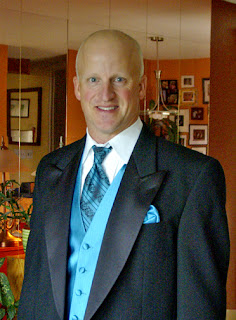 Admittedly, I spent time between serving courses harvesting information from Twitter and passing them along to my table, who were eager to get the inside track while enjoying their food and fun.

Congratulations and thanks to everyone who made the 2011 Harvest of Hope a bountiful experience for the Canadian Cancer Society, proving once again that Wood Buffalo is the most generous community in the country.
Email Post
Labels: Alison Redford Canadian Cancer Society Doug Horner Gar Mar Harvest of Hope Jason Blair Julie Florez PC Leadership Race