Over the years, our family has billeted many different theatre artists, designer, directors and choreographers who spend weeks in the region working on productions.  It makes good use of the spare bedroom we have in the basement and for the artists, it provides a place to call home that is relatively close to Keyano Theatre.  Maybe all of theatrical talents that has come and gone have rubbed off on Dylan and Ben?  They both live and die for theatre, film, and performing. 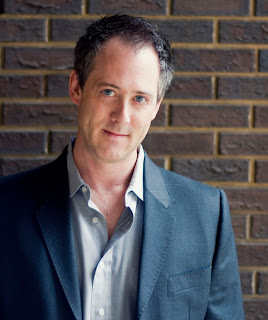 It's been great getting to know Dave Horak over the last few weeks.  He is here directing the first show in Keyano's 4-Play Drama Series: A Few Good Men by Aaron Sorkin.  Dylan already knew Dave; he is one of the instructors at Artstrek, Alberta's pan-provincial theatre camp for teens run by Theatre Alberta out of Red Deer College.  This is his first time directing in Fort McMurray as you will read in the following interview done for Arts Council Wood Buffalo for their weekly YMM Art Column in the Saturday edition of the Fort McMurray Today.  As there is a limited amount of space for that column, I couldn't share all of the questions and responses.  Here they are here:


1. First of all, welcome to Fort McMurray and Keyano Theatre. As you are directing here for the first time, can you share with us a little about yourself. Where do you live? How did you fall into theatre? What and where are you directing when you're not here?

Hi! Yes, it's my first time directing here. Well.. Sort of. I directed a show called The Bomb-itty of Errors that toured throughout Alberta this Spring as part of a series called "Picks of the Fringe" and it played here at Keyano in May. But I didn't come up to see it. So, two months ago when I came up here to do auditions was the first time I saw the theatre and meet the local actors. It's really a great facility and I've been impressed with the talent here as well!

I live in Edmonton where I split my time between directing, acting and teaching. This season I'm doing a fair bit of directing. After working on A Few Good Men here at Keyano, I'll start work on two projects: Curtains, a musical at MacEwan University and Burning Bluebeard a Christmas play that will be part of Theatre Network's Roxy Performance Series. In fact, I’m using my downtime here in Fort Mac to get started on these next projects.

I fell into theatre in grade 12 when the high school drama teacher encouraged me to audition for the school play. The play was Charley's Aunt and when I realized that I could skip out on some classes to do rehearsals and as a bonus get to kiss a pretty girl in the play, I was sold!

2. What is it like coming into a new community, with a collection of actors that you've likely never met before, and diving into a play like A Few Good Men?

I’ve worked in a whole bunch of different places, from Colleges and Universities to professional theatres across Canada and the U.S. and one thing that is always the same is that I meet a dedicated group of people, working their hardest and trying to do the best production possible. So, in one way, working on a play is always the same, no matter where it is. The text of the play (if there is one) is always the centre. The question I always have whenever I start a new project is “what does this piece have to say to the audience that will gather to see it today, here, and in this case, in Fort McMurray?” And so I’ve asked this local cast, working on a very American play with American themes, what does it say to them? In essence: Why should we do this play? It’s always a question, whether I’m doing Shakespeare or a hip hop musical. And this cast has come up with some great answers. You’ll have to come see the play to see what they are!

3. What are the key steps for you as a director in getting ready for this process?

I read the play a lot, searching for questions that arise in the play. Where will it be? How does that thing happen? I begin by gathering a whole host of questions and then the rest of the process is about answering most of them. Once I have a good sense of who is cast, I’ll start to really plan what I envision will be the process of rehearsal to answer all my questions. Then the discussions with the designers will start and that will begin to answer even more questions. Inevitably, whatever my plan is, it usually goes out the window once we start, since I really try and respond to what the cast, designers and crew bring to the process. But I always start with some sort of plan, which in this case I knew I wanted to have some sort of ensemble-building process during rehearsal since the cast consists of some very experienced actors along with a few people who’ve never been on the Keyano stage before.

4. This is one of those plays when you are dealing with a film version that is embedded in peoples' minds. Does that reality work for or against you?

Both. I’m hoping that the audience will be curious to see this version if they are familiar with the movie, or even if all they know is one of its famous lines. Because some will know the movie, we have an opportunity to bring people into the theatre who might not regularly go. It works against us a bit because the film actors are so famous that it could be a trap to try and replicate what they did in the film. We’re doing theatre after all so the rules we have to play with are somewhat different than in film. So there’s some work to make sure we’re really interpreting the piece through the actors we have and not some idea of the film version.

5. This is a question we often ask volunteer actors, but it might be illuminating to get your take on it. How would you describe the importance of community theatre, both at the local level and the impact that it has on the broader theatre world?

Well, I haven’t done any community theatre since I was in high school, but I really want to support any group that endeavours to bring theatre to their community. I strongly believe that theatre is a local event - and that theatre has real power to reach a community with whatever story it decides to tell. And with community theatre that is made up of local volunteers; I think that there’s real power in that local connection. Part of my job as an outsider is to listen to this group to hear what they want to say through this play.

What I’ve learned by working with this cast and also when I’ve gone to see other community theatre (The Walterdale Theatre in Edmonton is a great community theatre that relies mostly on volunteers) is the difference between a job and a passion. Sometimes working in the professional theatre can sometimes feel like any old job, a bit like punching a time clock, but when you are surrounded by people who are giving up their free time, sacrificing a vacation or time with family to do rehearsal, it’s a great reminder about dedication and passion. And I think you can feel that from the stage. I so appreciate that lesson. 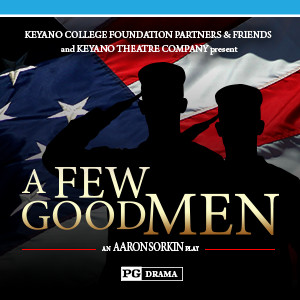 I am a fan of Aaron Sorkin (The Farnsworth Invention, The West Wing, The Newsroom) and I'm quickly becoming a fan of Dave Horak.  The combination of these two spheres of admiration make me very excited to see A Few Good Men at Keyano Theatre.  It runs October 1, 2, 3, 7, 8, 9, 10.  We'll be there on Opening Night to stand at attention and in appreciation.
Email Post