I ended up spend about six hours working on the painting of Earl B. Finning at the We Care fundraising event put on by our friends at Finning to raise money for the United Way community campaign.  It had already been a big painting day, as I was on deadline for a large portrait of Sentimental Gentlemen, a local rock band, and had been in the studio since early in the morning. 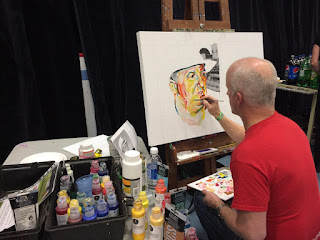 I was planted on the field house at the Syncrude Sport and Wellness Centre next to the spot where they were selling drink tickets, accompanied by a couple of athletes from the Keyano College ladies volleyball team.  They were selling raffle tickets for the painting I was doing: 1 for $10 or 3 for $20. They were both from the Nanaimo area and were in Fort McMurray to learn and pursue their sport.

Later in the evening, one of the girls got called way to work one of the blackjack tables.  It was at that point I noticed what had been absent for most of the night with the one that stayed behind.

"It strikes me," I started saying to Alycha, "that you haven't been on your iPhone all night.  I think that's remarkable."

I was a little stunned and a lot impressed.

In this day and age when all of us are guilt of leaning on the electronic crutches of our lives, this young lady had the infinite patience and class to sit at her volunteer post all evening and be attentive to what was happening around her.  I think that is something to be acknowledged and lauded.  We should all take a page from Alycha's playbook once in awhile.
Email Post