Motivation arrives just when I need it most

My body was sore the morning after the live painting experience at the Harvest of Hope.  I'm not sure if it was the intensity of the four hours of painting, the way I was sitting, or the exertion of having to lug my gear up and down the stairs at Shell Place, but I was pooped and a little achy.  All of that said, it was a brilliant experience. 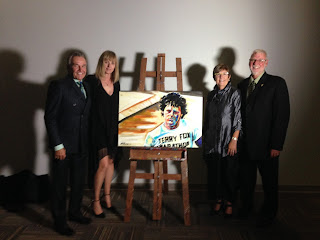 It was icing on the cake that John Wilson bought the painting of Terry Fox.  John and I go way back, probably further back than he remembers.  He was a big help with the food bank drive, back in the days when I was the program director at the radio stations (CJOK and KYX 98) and the food bank was up in Gregoire.  He was also Chair of the Keyano College Board of Governors for the majority of the years that I worked there, and certainly during the most exciting and dynamic times.  John has always been a stand up community champion and a consummate gentleman.  It brings me great satisfaction that something I created on the 10th anniversary of the Harvest of Hope will become a part of the Wilson home.

I jumped from Terry Fox into one of my most challenging pieces to date, a family portrait of five kids.  I have done five individuals in a single painting twice before; one was of the Jackson Five, the other of the Temptations.  They were both difficult projects but comprised of subjects that were largely in their adult years, with lots of character lines, shadows and features.  Painting kids is a whole different ball game and I put in many long hours getting this most recent project to the point of completion. 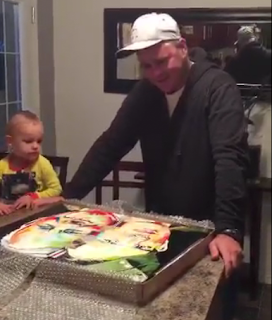 There is always a moment with the tougher pieces when I reach the point of running out of steam and have to draw on something to push me forward.  Tonight, that push came in the form of a video.  A client had given her husband a painting that I had done of his grandfather.  His reaction as he unwrapped the package and had his first look at the younger and older version of WWII veteran Reg Connors was pretty amazing.  I had a tear in my eye by the end of it.

It seems that when I need a burst of motivation, I get it.  I was able to finish the piece with the five kids and share it with the client.  They were thrilled, and one of them might have even shed a tear, too.
Email Post