Al Vinni's motion to spark discussions with industry about the potential for lowering taxes in exchange for a reduction or elimination of fly-in fly-out (FIFO) drew me back to municipal council chambers for the first time in about two years.  A lot has changed. 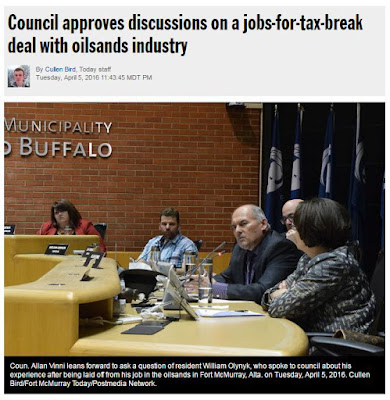 Looking around the room at the various staff support people who are available to answer technical questions, only a few were familiar.  The make up of council is pretty much the same except that Keith McGrath is a shadow of his former self - an exercise program has had a dramatic effect, and Claris Voyageur has joined the ranks following a recent by-election to replace her late husband, John Chadi.  Having Colleen Tatum back on council is new since the last time I was in chambers, but she was away yesterday and watched proceedings via social media.  She replaced Guy Boutilier after he resigned.  Oh yes, Tyran Ault was also away last night.

Every seat in the gallery was occupied in anticipation of the motion that anchored the short meeting. Business and industry people were there, as were other folks in the community highly engaged in civic politics.  It begs the question of whether a larger council chambers is something to be explored.  There have been a number of times when that space just can't safely handle the number of people who wish to be present.

A lot has changed, but so much has stayed the same.  I miss good people who are trying to do the right thing and I miss the process.  However,  knowing some of the interpersonal relationships at play magnified some of the comments, asides and retorts heard at last night's meeting.  I don't miss those.

I appreciated the perspective and passion of my friend Marty Giles - he was the first to speak to the motion last night.  I equally appreciated the industry perspective offered by Reegan McCullough of the Oil Sands Community Alliance - he came with insights about the complexity of the FIFO issue.  Nick Sanders spoke on behalf of the Fort McMurray Chamber of Commerce and brought forward an offer to support the process of the discussions to come.

One gentleman named William (didn't catch his last name) was watching the proceedings on Shaw TV and felt compelled to rush down to chambers to speak.  He was a little out of breath, but spoke passionately about this community and his view as one of many who have been laid off.

I'm glad that Don Scott got up near the end to offer the suggestion to build in a report back mechanism into the mix, along with a specific timeline.  These things have a way of stretching out into eternity and nothingness if there are no time expectations.

Council debate was short and succinct; some spoke to the motions, others did not.  In the end, it received unanimous support and the table has been officially set for dialogue with industry.

Even though we are 19 months away from the next municipal election, I can guarantee that eventuality was present in the room.  In the normal civic election cycle of this community (established from many long years of having three-year terms) this fall would have been election time.  Maybe that's why so much jockeying for position is happening so early.  Maybe it's in our community's DNA.  Several whispered candidates were in the gallery last night, watching the proceedings very carefully.

For my part, I was happy to be present for this important motion, but glad to get back to Birdsong Studio when it was over.  I think I prefer my canvases, brushes and paints and my United Way activities to political life.  We all have our roles to play; I'm glad to have stumbled into mine.