I didn't plan to paint during my visit to Innisfail this weekend.  My purpose in traveling to the central Alberta community was to do a keynote address on the value of volunteerism.  The "address" really became the "experience", as the 150 participants provided all the magic through their conversations and stories.

The last time I was in Innisfail it was in the mid 1990s.  I was playing the role of the Q91 Money Man, giving out $100 bills at the Innisfail Rodeo.  While I had a loose connection to the community, I only really knew Karen Bradbury, who moved to the community four months ago with her husband - she used to work with one of our United Way member agencies back in Fort McMurray.  She convinced the committee that I would be a right fit for what they were trying to do with this year's volunteer appreciation event.

Any fears or uncertainty I had about doing my thing in a hall full of strangers dissipated almost immediately.  The first guest to arrive, as I was 30 minutes into my painting of Terry Fox, was Ruth Meisner.  Raised in the bush and the farm, and a lifelong resident of the Innisfail area, Ruth is well into her 80s.  I purposely paused my painting a couple of times to go and keep her company.  She was very welcoming and friendly.

Several of her friends showed up and they began chattering about what I was doing and who I was.  I could hear them over my left shoulder, just a few tables away from where I was set up. I couldn't resist doing what I did next.

I put down my brush, and swept over to the table.

"Have you met my friend Ruth," I said to the other ladies who had arrived.

"We used to date in high school, but she doesn't quite remember."

Ruth and her friends broke out in big laughter, and Ruth turned a bright shade of blush. 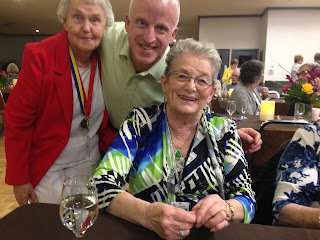 She was such a good sport as I returned to her table several times during my presentation to add to the fun.

"What was the most excitement you ever had volunteering?" I asked her, on the microphone, as I was going from table to table and got people to share.

"Oh, I'll never forget it," she began.  "I was volunteering as a clown and handing out all kinds of candy (I don't remember where she was doing this as I became so discombobulated with what she said next).  It was great, until everyone got diarrhoea."

The place erupted with laughter, as did I. 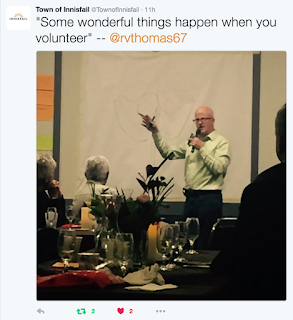 There were a lot of great moments during the evening, but the highlight for me was when I had them do a reflective exercise.  I asked them to think of a moment when a volunteer made a difference in their lives.  The task was to write a short message of gratitude with a specific mention of how that person had made a difference. 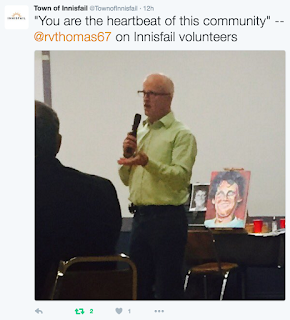 The willingness of this amazing group of people to go to life-changing moments was something else.  My only regret is that I didn't take any pictures of the notes that we stuck to the wall.  They were filled with anecdotes and memories of caring, compassion and true human impact.  The Town of Innisfail may post some on their website in the coming days, as they tell a compelling story about what volunteering has the potential to do.

Karen had tipped me off that I was likely going to get along famously with the emcee for the evening, Councillor Mark Kemball.  Goodness, was she ever right. 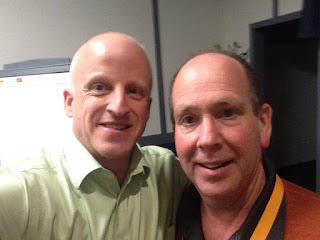 Mark was a spectacular emcee, connecting well with the audience, and mixing in the perfect balance of humour and heart.  A community theatre actor, a former radio personality, and an obvious connector, the similarities between the two of us were inescapable.

"Ladies and gentlemen, allow me to introduce my brother from another mother....," he said, closing off my introduction.

The idea of painting something struck me the day before.  So, I called Karen, who was my direct contact with the Town of Innisfail, and threw the idea by her.  I knew I could arrived in enough time to set up and complete the portrait before my piece of the program.  It certainly wasn't part of my contract, but I felt strongly that I wanted to do something extra. 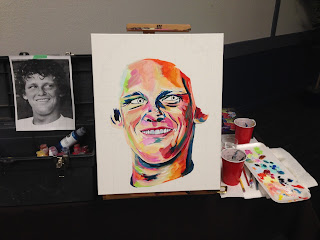 I arrived at the Legion hall just after 4:00 pm and got set up.  It was about 5 pm when I began painting one of Canada's most iconic volunteers.  I signed it just minutes before Mark handed over the microphone to me for my 45-minute segment of the program. 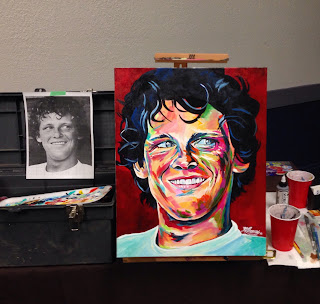 "I felt like I really wanted to leave something behind for the community," I said.  "So, this portrait of Terry Fox will join the collection of door prizes that will be won at the end of the evening." 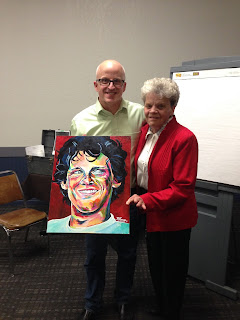 The winner was Carole Sim, the coordinator of the Innisfail Food Bank.  It was so appropriate that she won as the Food Bank made its way into a number of conversations last night.  The people of Innisfail are struggling through this downturn just as we are.  There was a strong sense of responsibility in looking after each other, and the Food Bank is integral to that care.

I am so grateful to the Town of Innisfail for inviting me to contribute to the evening.  It was an absolute delight for me to get a small taste of the hospitality and character of the people of this community.  I look forward to a return visit some time soon.