Our home in Old McMurray

We live in what is the "old" part of McMurray, right downtown, in GCOS houses, places built to accommodate the swell of people that came into the community to work at Great Canadian Oil Sands, now Suncor.  They likely started building this house in 1968 or early in 1969.  I bought the place 30 years later.

This has been a great home for us, and apart from planned renovations, has been incredibly kind.  As winter turned into spring, we noticed that the front steps were changing.  Little bits of concrete were starting to flake off.  It was like the structural integrity of the concrete had reached its tipping point and within days, a perfectly good set of stairs were turning into an unsightly mess and a safety hazard. 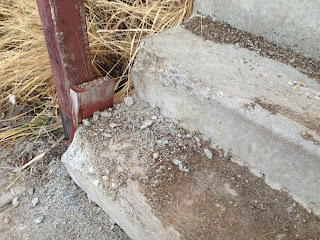 We made a few phone calls, got a couple of quotes, and hired Stratford Contracting - the same company that built our garage about a decade earlier - they demolished the steps and replaced them with pressure treated deck stairs.  The deal was made at the end of one week and the project completed at the beginning of the next.  Among the upsides of a down economy is the ability for this kind of work to happen in short order.  When things were smoking hot, you'd wait months and months for contractors to find time to do these kind of jobs. 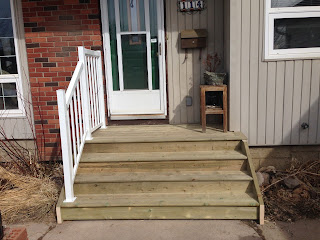 The workmanship was excellent as was the attention to detail.  The demolition and construction took a full day and a little bit of the next.  It couldn't have gone smoother.  Shawn Chaulk, the owner of the company, checked in several times, and Adam did a fantastic job building a set of steps that look great and are going to be safe for decades to come.

Owning an older house, we are always looking at the next thing that require attention.  Our eaves are going to need to be replaced this season for sure.  Despite necessary fixes and upgrades, I love living downtown.  We are close to everything, there are great places to walk, and the birds are plentiful.  The mature Manitoba maples in our backyard are attractive to a wide variety of birds that love to sing.  Birdsong Studio is named that way for good reason; it is often surrounded by song.