I heard that country music legend Merle Haggard had died yesterday morning.  It was all over Facebook.  He was 79, just a few years younger than my father.

I loved Merle Haggard's music.  He had such a beautiful and heartfelt tone to his voice, and he could do things with the notes that few other country crooners could.  I'll never forget the first time I heard "Are the Good Times Really Over",  it stopped me in my tracks.

He was a proud American and stood tall for his country through songs like "The Fightin' Side of Me" and "Okie from Muskogee".

I listened to Merle last night as I did my thing out in Birdsong Studio, a collection of rerecorded hits that I had downloaded on iTunes.  It was a perfect way to channel everything that he was and represented. 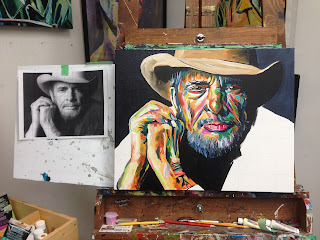 Through the process of doing this portrait and posting it on my Russell Thomas Art page I discovered something interesting.  You see, I posted a photo of the painting when it was mostly done, and Facebook allowed it to be seen by well over 1,000 people in the first hour. 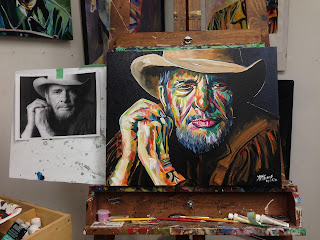 I then posted a photo of the finished painting with the idea that bids would start at $300 and it would be sold to the highest bidder this morning.  The trouble was that after an hour, Facebook only allowed the post to be seen by 44 people.

What the hell? I thought to myself.

I did an experiment and deleted the second post with the finished painting, then reposted it without any mention of selling it or taking bids.  Views went through the roof almost immediately.

So, if you were one of the 44 people that saw that post, I apologize.  I'm still going to sell the portrait, but will wait until later today when I can take an archival photograph of it.  By all means, if you have an interest, please let me know by sending me a private message on my Russell Thomas Art page. I will accept bids starting at $300.  I sensed a great interest in Merle Haggard and the potential of owning this painting done on his birthday and his last day.  In this way, everyone has a chance to give it a home.

If you'd prefer to not to connect via Facebook, there are two other ways to get in touch with me: