FIFO is killing this town 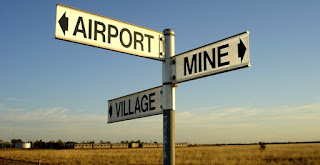 On Tuesday, municipal council is going to debate the motion brought forward by Councillor Al Vinni to open the door to the possibility of reducing the non-residential business class (including industry) mil rate in exchange for concessions related to fly-in, fly-out (hereafter denoted by its more ubiquitous acronym FIFO) and creating local jobs.

"FIFO is killing this town," said Al Vinni during a recent visit.

I love Al.  He has a way of calling it like it is, but from a perspective of intelligence.  In other words, when he makes a strong statement like the one about the negative impacts of flying workers in to and out of oil sands sites - by the tens of thousands I might add - I pay attention.

If there is one thing this motion has done, it has sparked a public dialogue.  People on all sides of the issue are talking about it.  One story spawned from Cr. Vinni's appearance on Alberta@Noon on CBC has been shared over 2000 times.  I don't know exactly what that translates to in terms of number of eyes, but my guess would be over 200,000.

People locally are generally saying "It's about bloody time."  They recognize, at a very personal level, the devastating impact that the FIFO practice has had on the local economy and on families, organizations, social profits and businesses. Jobs have left town, stores have shut down, the number of foreclosures is increasing, families are needing to use the food bank for the first time in their lives, and hope has dissipated.

There is a large group of people who were Fort McMurray residents who are no longer.  They are living in other centres - Edmonton, St. Albert, Sherwood Park, Red Deer, and Calgary among them - and flying to work for their six days on, then flying back for their six off.  They are enjoying the lower house prices and salary premium for accepting a FIFO job.  They were compelled to pull up stakes and pitch their tents down south and now that the pain of the move is mostly done, they are quite enjoying it.  Again generally, they are upset this idea of curtailing or eliminating FIFO is on the table.

Then there are those folks from across the province (and country, though in much lesser numbers than before the downturn) who have always been commuters.  They are also up in arms that the people of Fort McMurray are floating this idea.  "How dare they mess with my livelihood," wrote one anonymous person in response to the initial story.  "We built that place," wrote another.  "If it wasn't for us, they would have no industry."

Industry has been predictably silent as they have more skin the game than anyone.  Airport infrastructure, airline contracts, employee contracts, and internal systems that have been designed for this very established method of operating their plants, doing maintenance, turnarounds and shutdowns, would cost millions of man hours and dollars to change.  Whether they are looking at the dangling carrot of lower taxes and paying it any mind is anyone's guess.

There are numerous misrepresentations of what is being proposed.  Nobody is suggesting multiple hour commute times to and from distant work sites.  What is being suggested is that instead of flying people from Edmonton, Calgary or Red Deer and having them stay in camp during their 6 days on, bus them from Fort McMurray to do the same.  My understanding - though I stand prepared to be corrected - is that current FIFO opportunities do not include flying from Fort McMurray.

In order for this to work - for the families, community, province, country and industry - a lot of work is going to need to happen.  Industry would love to see a reduction in their mil rate; they've been asking for it for years.  Fort McMurray residents would love to see jobs in the region going to local qualified people first, if they are here.  Commuters would like to continue having opportunities to contribute their skills and provide for their families.  Is win-win-win possible?  Maybe; maybe not.
Time will tell.

It's also important to remember that the oil price will eventually recover and it's conceivable that the well of talent living in the region will once again dry up.  Industry will need mechanisms within any agreement to be able able to adjust when times are good.

At the very least, tongues are wagging, information is being shared, and action is being taken to actually do something about the FIFO stasis that has had a dramatic impact on the people and businesses of this community.

If you have an opinion or perspective, I would encourage you to share it.  The motion gets debated by municipal council on Tuesday.  The public is always invited to attend and there are opportunities to be heard.