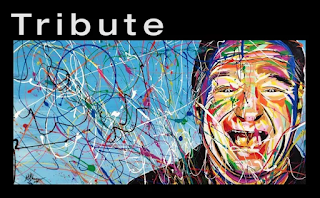 Filmmaker and storyteller Sean McLennan set out to capture a slice of my painting journey a couple of months ago.  He decided to zero in on the tribute portrait piece of what I do and produced a beautiful five minute mini-documentary.


He filmed the first time when I was working on a portrait of Monty Vanmackelberg, a community member  who died suddenly earlier this year.  Birdsong Studio was in its former state at that point, cluttered and packed with tools from my carpentry days.  When he came back for the interview, everything had been cleared out by my brother-in-law Chris and there was tons of space everywhere.

If you watch the film, you'll see elements of this journey that didn't get spoken about but are equally important to those that did. 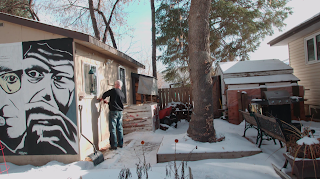 In the opening shot of me walking out back and into the studio, you'll see two large murals - tri-tone portraits of Woody Allen and Bill Clinton.  These could soon be relegated to the past as I'm contemplating painting over them and replacing them with something new. 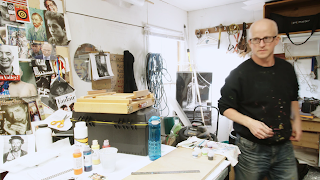 On an old cork board I have pinned up a bunch of images ripped from magazines.  They serve as inspirations of colour, texture, line and character.  If I had my way, I would have an inspiration wall that is triple in size.  However, space is still limited, even after the clean up. 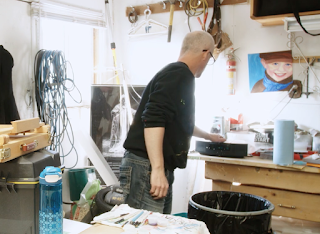 The music that you hear when I go into the studio and turn on my stereo is "Fearless" by the Mike Allen Trio.  No, not our Mike Allen, the other one, from Victoria.  He once played a gig in the Rehearsal Hall at Keyano; I have been following his music ever since.  "Fearless" always felt like home to me, and I always thought that if my life had a soundtrack, it needed to be on it.  My deepest thanks to Mike for allowing Sean to use it as an integral part of this project. 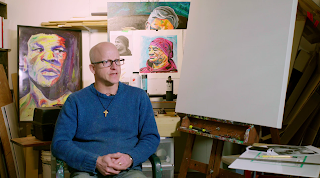 In the background of the interview is a colourful portrait of Mike Tyson.  It is actually a poster made from a small watercolour painting that I did in 2012.  Those water colours played a big role in leading to the wild colour acrylic style of today.  Benjamin Burton Florez is also in the shot, waiting to be given to his wonderful parents the following day. 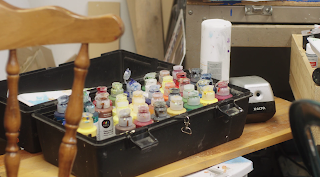 About a year ago, I made the switch from a ragtag collection of house paints to Opus Essentials.  These liquid acrylics have been my faithful companions since.  Some of the less used colours have not had to be replaced.  Others, like Naples Yellow and Pthyalo Turquoise, have been replenished several times. 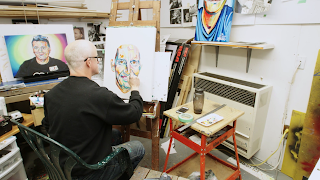 Party planner, oil sands champion, and all around connected buy; Robbie Picard has played a large role in my success as a painter.  He has commissioned multiple pieces and has invited me to do live paintings at several of his large events.  In fact, one is coming up on April 30th with the 2nd Annual We Love OilSands 70s, 80s, 90s and 2000s Dance Party.  I'll be doing two paintings in one night.  Stay tuned for details in the coming week. 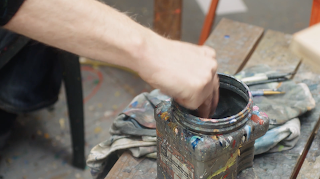 I've been using the same bucket - an old screw container - to clean my brushes for a long, long time.  Can you tell?  If a container could talk...


My deepest thanks to Sean McLennan for his inspired work as a filmmaker.  He put a lot of thought and work into this project; he also injected a lot of heart.  The responses that I've been hearing have been incredibly positive.  You can see some of Sean's other work by clicking here.