In my short career as a professional artist, I have largely focused on portraits, colourful interpretations of the human face.  However, throughout this two-year journey, I have made several deviations into uncharted territory. 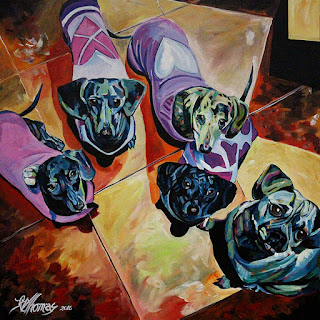 As an example, somewhere along the way I started doing pets - cats and dogs for clients who felt that my style would work to capture their furry friends.  That exploration of animals has recently gone a little further with a gorilla, raven and curious cow. 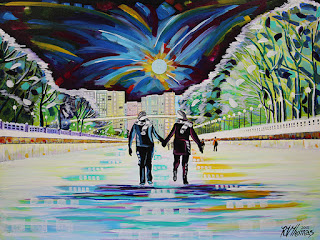 Kristal asked me to capture a beautiful moment when her and her mom were skating down the Rideau Canal in Ottawa.  Most recently, Tam asked me to paint 129 Amberwood Court, her boyfriend's home that was lost in the devastating Fort McMurray fire in May. 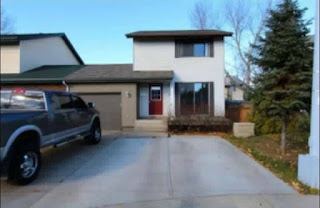 I spent the last three evenings working on the painting of this house that, sadly, is now a pile of ashes and debris.  While it was super challenging - trying to find the personality in a standard front view snapshot was not an easy task - I knew it was very important to Tam and her boyfriend Mike. 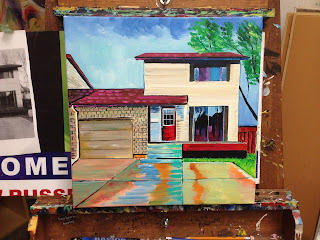 Trust the process, I thought to myself, as I continued adding details and colour. 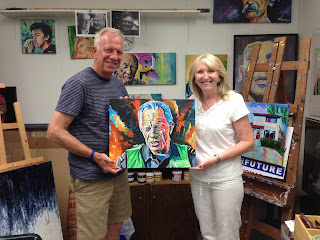 The painting was finished shortly after we had a visit last night from Fire Chief Darby Allen and his lovely wife Maria.  They had popped by Birdsong Studio to see the original painting I did of Darby back on Mother's Day and to catch up.

I waited for it to mostly dry before wrapping it up and delivering it to Mike at MacDonald Island.  He was about to go shoot some balls at the driving range.  Tam had tears in her eyes as he unwrapped her special present to him.

"So sorry about losing your house," I said. 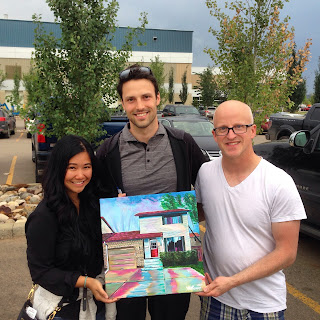 I could tell that behind the comment was years of determination, sacrifice and pride of place.

I went home to relax for a bit and picked up an old issue of "Acrylic Artist" magazine, for no other reason than it was calling to me.  This was the first thing I read:

Is versatility an underrated virtue for artists?  Too much variety in a painter's oeuvre creates confusion about who he or she is; too little, and the work can grow stale. Striking a balance between evolution and homeostasis in one's work - growing as an artist while staying true to one's creative voice - is tricky.  In addition, it requires great effort to abandon the reassuring comfort of achievement to venture into unfamiliar territory.  (from "At Home on the Northern Plains" by Judith Fairly, Acrylic Artist, Fall 2014)

The words really hit home for me.  I have no intention of abandoning my exploration of faces, but I will continue to paint other subjects and styles from time to time as I know they will add richness to my journey.


In the case of 129 Amberwood Court, it captures one of the thousands of homes that were lost on May 3rd and will hopefully inspire many great memories as Mike and Tam rebuild in the months to come.
Email Post