The kindness of strangers

In the crazy weeks that followed the Fort McMurray fire, we all were recipients random acts of kindness.  Strangers paid for meals, agencies helped put clothes on our backs, and hugs were offered by total strangers.  Everyone has multiple stories of the amazing generosity they experienced through this life-altering event.

During the surreal moments between arriving home from school and the mandatory evacuation call, Ben decided to put in a load of laundry.  That load was still in there four weeks later when we made our re-entry.  And while my sniffer couldn't tell the difference, Heather's sense of smell could pick up the residual smell of mildew.  The new washing machine arrived the other day and volunteers from Samaritan's Purse arrived yesterday afternoon to help bring it downstairs.

Perhaps when I was younger I would have attempted bringing in this heavy appliance without assistance.  However, with a reoccurring hernia on my left side, I didn't want to risk it.  Instead, Heather put in a request for assistance to this christian humanitarian agency and seven people arrived in earnest.

These were wonderful volunteers from communities across Alberta:  Lloydminster, Camrose, Calgary, and Tofield were names that I remember.  Most were with Samaritan's Purse and two were with the Billy Graham organization. 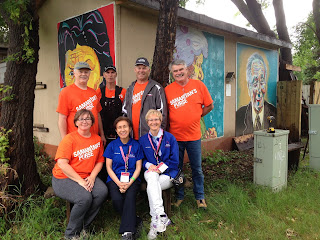 We enjoyed a lovely visit in Birdsong Studio.  I was able to show them the live painting I did of Billy Graham at the KAOS 91.1 fundraising banquet earlier this spring, and they got to see the original portrait of Fire Chief Darby Allen.  They were quite taken with both, one being displayed on my iPhone, the other up on the wall in the studio.

Just before they left, they offered a prayer and presented our family with a Bible, signed by the entire team.

My only regret in the whole thing was that Heather missed it.  She was in her studio with a cranio-sacral client.

I can't say enough about this group of volunteers who are making a difference in our community. Thank you for everything!
Email Post