The sounds of sirens

I had a reaction of instant fear as the sounds of sirens erupted downtown on July 1st.  As it turned out, it was the start of the Canada Day Parade and all the emergency vehicles - as they always do - make as much noise as they can to heighten the excitement of the long processional of first responders.  Apparently, it might have been one of the largest parades we've ever had and an opportunity for tens of thousands to acknowledge the bravery and sacrifice of these brave men and women.


I react to the noise of the sirens, just like I do when a helicopter or plane flies overhead.  Those sounds must be a big part of my unconscious memory of the day the fire invaded our community.

"That is a form of PTSD," suggested Natalie, a guest at our home the other night, who works with an aid agency out of Israel.

The strange thing is that while I'm having a fear response to these sounds, I don't have any discernible memory of sirens from May 3rd.  As I was evacuating south, crawling through Gregoire, my memories are mostly silent.  Hundreds of us were in the line of traffic leaving town, acting terribly polite and remaining completely calm, despite the wall of flames in our rearview mirrors.

I wonder if the sounds of sirens was there.  Perhaps I have just blocked them out.  I have vague memories of fire trucks and police cars zooming by me on the shoulders and in the right of ways.  The images are quiet, almost surreal. 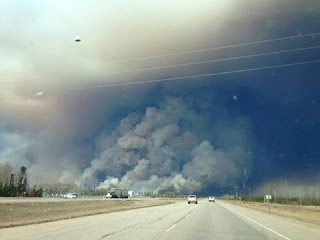 I also have a reaction to cumulus clouds off on the horizon.  I have to remind myself that they are just clouds.

I'm sharing all of this with the certainty that many others might be going through similar things.  The fact is that I am a fully functioning, well-adjusted adult, who has multiple decades of coping skills.  I recognize that I'm reacting in a strange way and can quickly draw the line between how I am acting/reacting and the traumatic event I went through just two months ago.  But, I wonder about the little ones and how they are coping?  Are they able to talk about it?  Or, are they more prone to suppressing their fears?

What I know for sure is that everyone is going to have a slightly different response to the events that happened in Fort McMurray at the beginning of May.   I also know that the more open we can be to have conversations about how we have been changed or affected by the fire and the evacuation, the  more others will be inclined to do so as well.  Together, we can reduce the stigma associated with mental or emotional impacts.  It is good to talk; it is good to share.