For 15 years, summer was a time when half my brain was always thinking about the second weekend in August, when the interPLAY Festival turn a busy vehicular thoroughfare into a bustling performing arts festival.  I was a long-time volunteer with the organization that ran the event and eventually grew into Events Wood Buffalo.

From 1990 to 2013, interPLAY was an essential and anticipated element of Fort McMurray summers.   Unfortunately, hard times fell on Events Wood Buffalo and the interPLAY Festival joined several other signature events in the celebrations graveyard.

I don't miss the stress of organizing a festival of interPLAY's magnitude.  It was stress that I welcomed and embraced in my younger years, which I avoid at all costs now that I'm almost 50.  I miss the people and I miss the magic that was created when tents went up along Franklin Avenue and street performers began gathering crowds.

Last week, one of the legendary performers of interPLAYs gone by reached out.  Dr. John Roberts appeared on the scene in about 2002, showing up out of the blue wanting to busk.  He was rather insistent so we gave him a spot on the fringes of the festival site.  He proceeded to hypnotize people en masse and gathered huge audiences throughout the 3-day festival.  The following year we gave him a venue of his own, the outdoor amphitheatre (where Jubilee Plaza is now), and he gathered some of the biggest crowds we had ever seen and sold out late night adult-oriented indoor shows.  He is the all-time box office king of interPLAY. 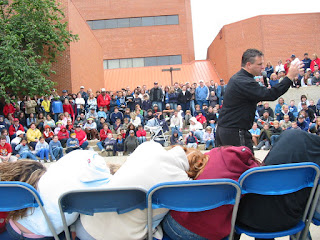 Dr. John Roberts fell off the map after his last visit to interPLAY in 2004.  He became quite ill, unbeknownst to any of us, and was unable to work.  He is much better 12 years later, and looking great. 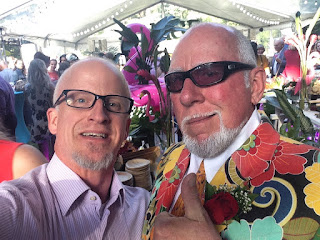 I ran into another legend of interPLAY a few weeks back when I was doing a live painting event at Brett Wilson's Garden Party in Calgary.  Clark Robertson, a.k.a. That Don Cherry Guy, was working the crowd, making people laugh and posing for hundreds of pictures.  It's amazing how he has turned this characterization of one of our iconic sports/media celebrities into a great entertainment element for events.

Clark always had a knack for crowds.  I always associate his performances at the 1998 interPLAY with the scaling up of the festival.  He gathered huge crowds that year and the festival began to really take off.

The interPLAY Festival was a place for street performers, buskers, shopping, theatre, dance, art and music.  It had a little bit of everything.  Over the years that I was involved we had some amazing acts and unforgettable moments.  We also had a great team of volunteers and paid professionals that turned the street into a marvellous oasis of fun every single summer. 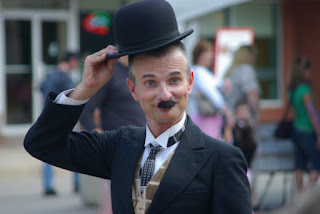 My one regret, if I can be allowed one, is that it no longer happens.  I wish in my heart of hearts that it was still alive so that I could attend and enjoy as a patron of the arts and a fan of all the disciplines it featured.
Email Post