This has been a busy summer of painting; this week, especially so, as I'm mostly on holidays from my work at United Way. I say "mostly" only because our national President is in town today and I'm going to be popping into the office this morning to meet her and facilitate a dialogue with media.

On my time off, I have balanced doing a massive yard clean up with spending time in the studio.  A lot has been accomplished on both fronts with some medical tales to present as evidence.

At some point on the weekend, I must have stepped on something sharp and pointy.  I felt the infection coming on in my right big toe and dashed to the hospital first thing on Monday morning.  The doctor couldn't see anything at that point, but prescribed me some antibiotics just in case.  People on social media were quite convinced it was gout.  However, my memories of what a full blown infection feels like proved to be right. 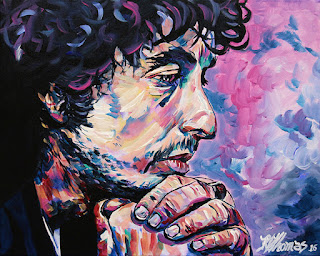 By the second day, I could barely walk and slipping my swollen toes into my flips flops was quite difficult and rather painful.  Thank goodness that painting doesn't require the use of my foot.  I painted Bob Dylan with a pronounced limp on Tuesday night.

It was purchased by Philo for her husband and they dropped by on Wednesday to pick it up.  They lost everything in the fire, including his massive collection of Bob Dylan albums, books, sheet music and coveted paraphernalia.  As we were just in the process of cleaning bookshelves, I decided to add to Philo's magnanimity by tossing in three different Bob Dylan books we had on the shelves.  It felt so right to pass these along with the painting to someone who shares a deep appreciation for the man I consider to be one of the greatest songwriters of our time. 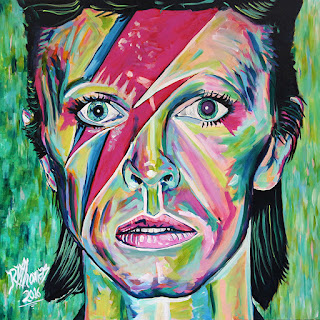 Someone has casually mentioned Ziggy Stardust during one of my workshops.  The suggestion stuck and Ziggy came to life on a large 36" x 36" canvas on Sunday.  While this was a WANT TO DO, it proved to be a real challenge for me, and ended up taking way more time and attention than I anticipated.  However, it was a good exploration and helped me grow my skills.

I was visiting CRUZ 100.5 yesterday and saw a motivational poster in their office featuring a riveting photo of Bob Marley.

"I'm going to paint that tonight," I said to Andrew Wilcox.  "I absolutely can't help myself." 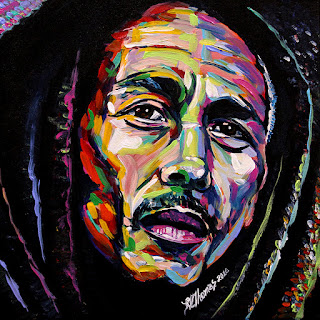 If you're following along, you might pick up that these WANT TO DO paintings typically sell rather quickly.  Many times, people reach out wanting to buy a piece several hours or the day after the portrait has been posted on social media and it is too late.  They typically get purchased within an hour of being shared.

My hope is to continue striking this NEED versus WANT balance through the summer, which means that something might pop up that captures your attention.  My only advice is not to hesitate if you think you'd like to own it.  Connect with me right away. Heidi, Brian, Robert, Philo, Bev, and Valerie have done that in the last two weeks and are now featuring new artwork on their walls.