"I've seen fire and I've seen rain," sang James Taylor in his 1970 hit. This is something that the residents of Fort McMurray who were in the city on Sunday can certainly attest to as the rain came down in buckets after the horrible fires in May. 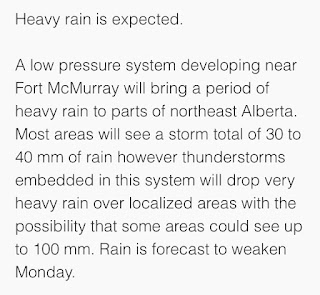 The lightening storm actually began in the middle of the night and escalated at daybreak.  I woke up to the warning shown above from our friends in the weather office. Eventually a lightening strike knocked out power to certain parts of the city, including our downtown neighbourhood. 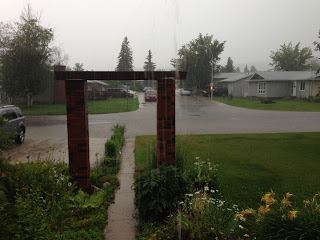 Heather decided to go to a local Starbucks, which had power, to do some work and enjoy a hot beverage.  It was while she was away that the heavy rain happened. 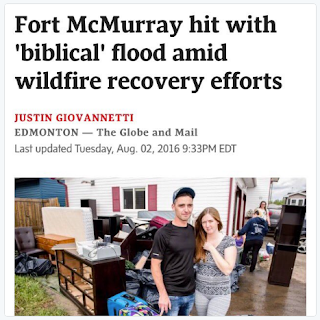 I haven't seen the Environment Canada number, but a story from The Globe and Mail cites that 85 mm of rain fell in a two-hour period.  If that is the case, it is no wonder that our street became a shallow lake and that adventurous residents got out their watercraft and started traversing roads.  Canoes and watercraft were seem playing in the rain. 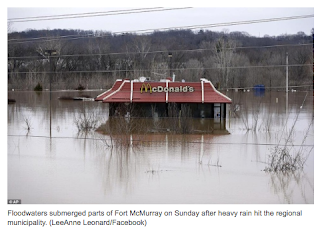 Sadly, because Fort McMurray had been in the eye of the media storm with the fires, the flames of interest got reignited with this event and the press went wild.  In their haste to capture the story, exaggerations ("Biblical flood") and mistakes (McDonald's photo used from different community and different flood - CBC) were made.

This is not to downplay the frustration, disappointment and costs being borne by homeowners of the apparent 37 residential properties that experienced some flooding.  The truth is that we get epic rain storms every couple of years and this one only made the headlines because there is such interest in our community from the other disaster we weathered in May.

In the days that have passed since that deluge of water hit our community, places like Yorkton (SK) and Grande Prairie (AB) have been hit with equally devastating storms, possibly more devastating.  Welcome to summer in Western Canada! 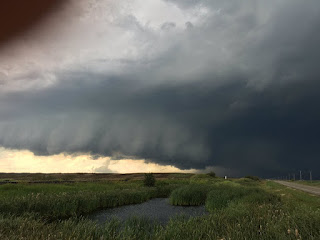 Mother Nature loves to play on the prairies.  She puts on quite a show when she sets her mind to it.
Email Post