My brother Keith purchased his first Beta machine in the early 1980s.  (For the millennials following along: in the days before streaming and downloads we have DVD players, before that...VHS players, and before...Beta machines)  Beta tapes were smaller and less common, but that's what my brother had, and he would faithfully record the hottest movies of the day as they got played during prime time or late at night.  He has an epic collection of tapes that had two, three, and even four movies on each one.  It was from these tapes that I had my introduction to Gene Wilder. 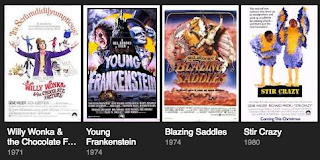 The classic comedy actor with the fuzzy hair and gentle demeanour died yesterday at the age of 83.  Apparently, he had been suffering from Alzheimer's disease.  Seeing news bulletins popping up all over Facebook yesterday afternoon took me right back to those Beta tapes of my brother, and memories of watching films like Blazing Saddles, Stir Crazy and Young Frankenstein over and over and over again.  Willy Wonka and the Chocolate Factory was not part of that collection, but it would once in awhile pop up on television and would be a can't miss event.

Another tip for millennials:  we had no choice as to when to watch shows.  They came on when TV Guide said they were on and that was it.  Life revolved around the start times of our favourite programs and movies. 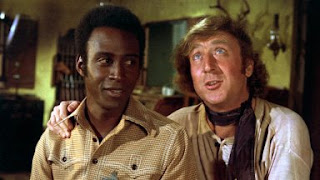 I had an instant reaction to Gene Wilder's death, but I didn't instantly go into planning mode for painting his portrait; that came later.  My son Dylan had a more profound reaction to this celebrity passing; his reaction helped me realize that I needed to get out into the studio last night.

I started sketching him out shortly after supper and begin putting paint to canvas around 7:15 pm.  I knew Heather had planned to be out for the evening, so that gave me at least a couple of hours to focus.  I snapped a picture at 9:15 pm and came into the house. 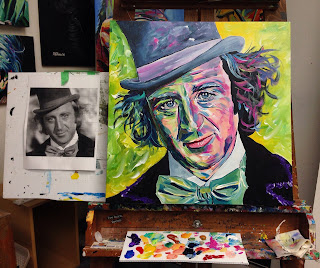 It was two hours of painting but it felt like 4 or 5.  Time seemed to slow down as I worked the canvas and tried to find the rhythm of the colours.  It was hard.  At the very end, I added some green tones to the left side of the face and the complementary strokes of colour to his crazy hair.  Those two final elements brought the piece to life.

Time slowed to a crawl for me on this project.  It makes no sense to me that it came together in an evening, though I know it did.  Much like the first Robin Williams, done the day he passed, and the tribute to BB King, done shortly after he died, this portrait of Gene Wilder is special.  I saw it the moment I stepped back and snapped the picture.  He meant something to me, and he meant something to Dylan.  He also meant something to Heather, as I observed from her reaction when I showed it to her on my phone. 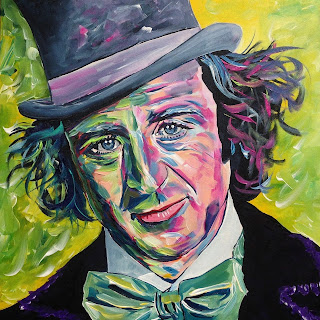 That emotional connection, that appreciation of this gentleman comic, comes through in the colour choices and in the brush strokes.  I'm proud of this one. 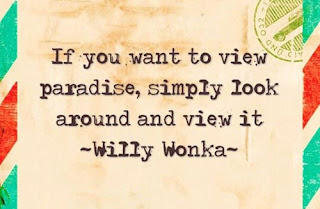