Last night, Mindcampers walked the Camino - a series of stations where other Mindcampers were performing, giving advice, doing whatever their hearts inspired them to share or do. 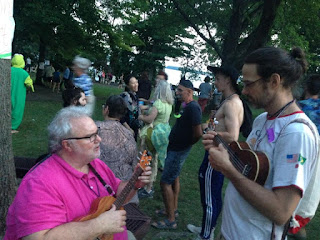 I was at a picnic table just outside the hub, exactly where I was last year, getting people to sign the back of Joe Miguez's portrait.  The plan was to have Tim, Matteo and Franca to deliver it to him personally at his home in New Jersey as a Mindcamp get well card.  Joe had a different plan. 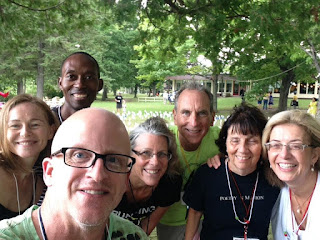 John, a long-time member of the creativity community and one of the amazing folks in my kaleidoscope group, came up to me and it was clear that something was wrong.

At first, it didn't compute.  Here we were, getting so many people to write messages of love and hope on the back of his portrait.  How could he be dead?

John held up the message that had just been sent to members of the creativity community from around the world.

A small group of us formed a circle and wrapped our arms around each other and held the space, and Joe.

Someone suggested - I think it was Laura Switalski - that we go walk the Labyrinth.  It seemed the most appropriate, and perfect, thing to do.

I was a little shaky, shaken really, walking through the circular path as the flags fluttered, children laughed, and the Camino continued....drums beating a beautiful heartbeat rhythm. 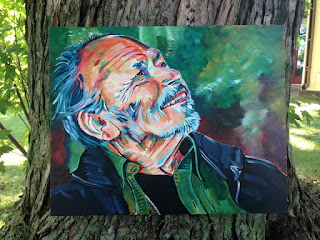 We met in the middle of the Labyrinth, held each other, held space and convened with Joe, who was among us one year earlier and now was within in us and around us, dancing on the breeze.

"In some crazy way, it is perfect that Joe passed on this day," I offered.  "We are all in this place, in the heart of Mindcamp, in the Lab, on this most beautiful night."

Joe Miguez had been part of the creativity community for the better part of 40 years, according to William Sterner who shared stories of the early days, Joe's personal struggles, and his beautiful brilliance.  We sat under the stars until late in the evening, laughing, debating, and dreaming of how we will change the world...exactly what Joe would have wanted. 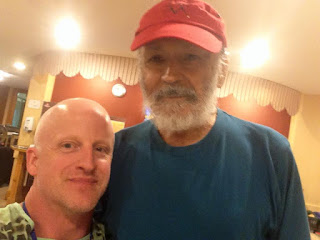 Two days before I left for Mindcamp, I had this overwhelming feeling that I needed to paint Joe.  I now understand why.