The fightin side of me 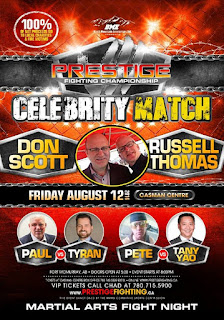 Only Sandy Bowman could convince me to get into the ring and go toe-to-toe with my very good friend Don Scott.  We have agreed, along with four other quick-on-their-feet fellows (Paul McWilliams, Tyran Ault, Pete Potipcoe and Tany Yao) to be the aperitifs between the main courses at the Prestige Fighting Championship on Friday night at Casman Centre.

For the record, I've never been much of a fighter.  I got into two scuffles in my life, and I remember both of them quite clearly.

The first was when I was a young teenager.  A neighbourhood bully decided to intervene in a football game we were playing on a community field near our house.  This individual had pushed me around previously and I had obviously reached my breaking point.  We let him have it.  I say "we", because my brother Keith and I teamed up to make sure we didn't get bothered again.  That was probably 40 years ago, and I still feel like we took it a little too far.  I saw the obituary for that fellow - he passed at quite a young age - and I felt a twinge of guilt for having hit him so many years before.

The second fight was right in the school, during grade seven.  It was the worst year of my life as I struggled to make the transition from elementary to junior high.  My grades sucked (first time ever), my stress went up, and I developed some pent up rage.  Some errant comment by a guy named Darryl set me off and we started exchanging fisticuffs in hallway.  It lasted mere seconds but we got caught by a teacher and were assigned detention duty:  we had to scrub the 200-foot hallway with toothbrushes. 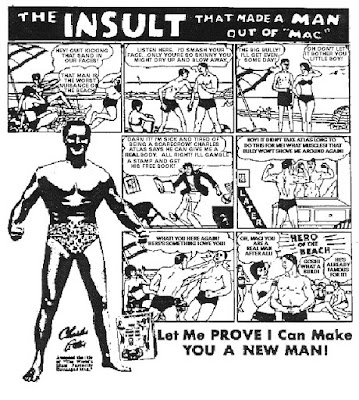 I used to read those comics on the back of magazines about that skinny kid on the beach who decides to bulk up to stand up to that muscle-bound jerk so he could get the girl.  I was that skinny kid and dreamed, at times, that I was otherwise.

So, I'm going up against lawyer, community champion, and former politician Don Scott.  We jokingly call ourself "brothers from another mother" because we have often been mistaken for each other.  People would come up to me when Don was in government and start spewing their opinions on the latest issue of the day.  Eventually, they would realize that they had the wrong guy.  Don would have people come up to him and tell him how much they enjoyed his performance in the latest Keyano Theatre play.  He would just smile and nod.

Having written a feature story about Don for YMM Magazine, I know a few things about him that should instil fear in my heart.  First of all, he has quick hands.  Don was quite a basketball player in his youth.  His dad - also a basketball phenom - would take young Don to games where he would proceed to spin basketballs on his fingers to entertain people.  I also know that Don is an avid badminton player and hiker.  So, not only is he going to be quick on his feet, he's going to have some endurance. 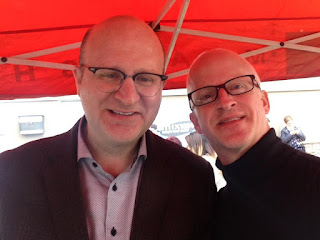 Long story short, I'm in big, big, trouble.  I lift a brush up and down; that's the extent of my exercise regime.  This is shaping up to be a disaster.  Thank goodness it's for a good cause!
Email Post