I was listening to CBC Canada Reads when I first heard about Terry Fallis and his breakout novel The Best Laid Plans.  Ali Velshi, a correspondent with CNN at the time, was defending the selection that went on to be the winner in 2011.  I bought the book and found myself lounging by the pool at a resort in Mexico laughing out loud as I read it. 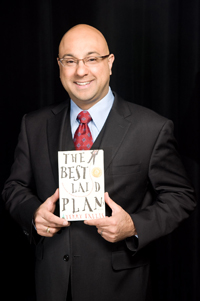 At some point, I reached out to Terry on Facebook and he accepted my friend request. Our initial loose connection strengthened over the years, we finally met in person yesterday.

I arrived at the pub early, as I often do for meetings, and selected a booth directly opposite the little stage in the quiet venue on Yonge Street.  When Terry arrived, it was with a bright, beaming smile.

"It's so bizarre that you picked this booth," he said.  "This is where I usually sit to meet people for lunch, the only exception is that I sit where you are, so I can see them coming in."

Terry is my favourite Canadian novelist/humorist.  His novels - five have been published so far - always draw me in and provide a marvellous reading experience.  He wasn't always a writer though; he started out his career by earning a Bachelor of Engineering degree.  A passion for student politics at University - he was elected President of the Students Union at McMaster - led to a full-time posting with Jean Cretien's political staff in 1984 followed by a legislative assistant gig with former Premier David Peterson's Liberal government in Ontario.

He translated his invaluable experience working within federal and provincial political machines to an 8-year consulting job with a leading government relations and communications firm before starting his own company, Thornley Fallis, with Joe Thornley, in 1995.  He still spends four days a week contributing to this firm.

When Terry discovered his passion for writing novels he was in his forties.  While he has achieved great success, it didn't come easy.

"I sent the first novel to multiple publishers," he shared.  "The silence was deafening.  I literally didn't hear anything back, not even a rejection letter."  With this strong encouragement of his wife, he self-published his debut novel.

He decided to submit The Best Laid Plans for the Stephen Leacock Medal for Humour in 2008, which he ended up winning.

"The application required that I submit 10 copies of my book," he recalled.  "I had exactly 10 copies left that I had self published.  Had there only been 9, you and I would probably never have met."

An agent and a publisher (McClelland and Stewart) soon followed and Terry's writing career went from a flight of fancy to the real deal.

Terry is at home in Toronto; it is the city that he has called home for most of his life.  His office is located just around the corner from the pub, and his home is a 12 minute walk away.  He has established a healthy balance of doing public relations work for Thornley Fallis and writing on weekends and holidays.  His next novel, set to be released in June 2017, is all finished and he will soon begin working on a new one.  Apart from writing, he invests a lot of time and energy making speaking appearances; there were well over 100 last year.

Everything changed for Terry when he decided to podcast "The Best Laid Plans".  He started receiving feedback from around the globe.  Those positive affirmations, along with the Leacock medal, and publishing deal have resulted in a mid-career shift that was both unexpected and delightful.

As I admired and appreciated Terry's novels from a distance, he did the same with my paintings.  Several caught his attention and many others inspired likes and comments.

"Two that really jumped out to me were the Henry Ford one you did and the Gandhi portrait on that black background," he said.  "And, of course, that Robin Williams."

At that point, I held up my iPhone and showed him the back of the case that protects it.

I even painted Terry's portrait at one point. 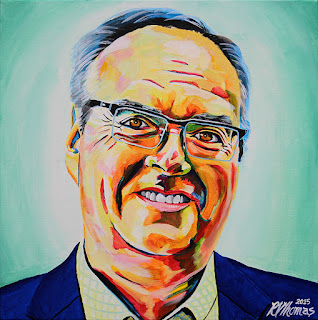 The fact that I was sitting having lunch with my favourite Canadian novelist was amazing; that he had specific memories in his head of paintings that I have done was inexplicably cool.

Finding creative success mid-career after decades of doing marketing and communications work, is one parallel between the two of us that is striking.  That we are a similar age and share a mutual appreciation for each others' work is another.  We each have sons that are deeply interested in theatre and wives that are hugely supportive of our creative pursuits. 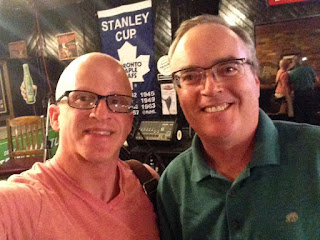 In my older years, I've learned to follow my instincts and "listen to the wind", as I like to call it.  I'm eternally gratefully that I reached out to connect with Terry on Facebook all those years ago, and that he accepted my invitation.  I'm also grateful that he had exactly 10 copies of his debut novel to submit for the Leacock Medal.  I've had a sense for the last couple of years that we would eventually meet.  Now we have, and I get the sense that this mutual admiration society and friendship is just getting started.  Thanks Terry!