As I sat in the lobby of Best Western Plus doing a live painting in support of United Day and the Red Menu Campaign, I reflected on how much I enjoy getting out of the studio and creating in public.  There is something energizing about being out in world, either at a big event with hundreds of people or at a restaurant during a busy lunch hour. 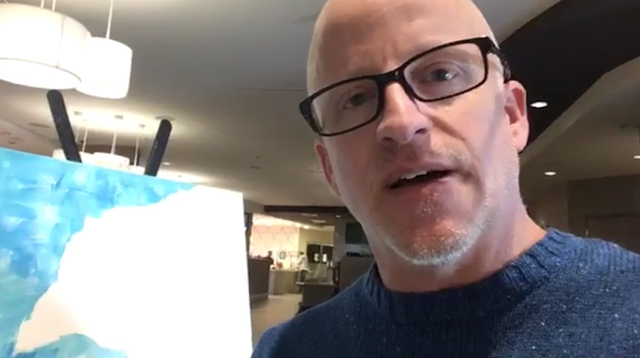 I soak up the energy of the space and the people in it.  Those who feel like engaging come up and introduce themselves; those who don't just watch from a distance.  A lady visiting from Thunder Bay came up to me while I was painting a raven in the lobby of Best Western Plus.

"How incredibly ironic that you're painting a raven," she said.  "It is my spirit animal, or so they tell me."

I especially love when the staff come up to visit.  I imagine that having an artist painting in their midst is a nice change to the normal routine.  Their eyes light up as they walk by and watch the progress.

The folks at Best Western Plus have won a number of awards of late for customer service.  Based on my two experiences of doing charity paintings in their lobby, I am not surprised. 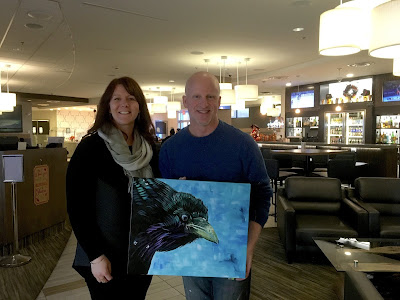 "I'd paint here any time," I said to Erin McKay, Assistant General Manager.


My second Red Menu painting of the day was at Surehka's on the Snye, one of Fort McMurray's newest restaurants, about a block from Birdsong Studio.  They've recently completed construction on the connector between Father Mercredi Street and Clearwater Drive which makes getting to Surehka's from our house about a one minute drive. 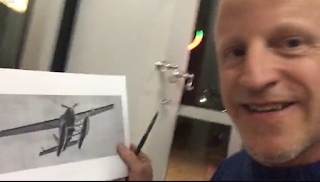 It was a full house in the restaurant last night as Eva LaPrairie was singing.  Eva is a lovely young lady with a strong repertoire of songs.  It was an absolute joy painting while listening to her.  Thank you Eva!

Surehka and her staff suggested a float plane as a subject that would resonate with them.  Of course, the Snye has been an aerodrome for decades.  They are part of the rich history of our community and the spot that Surehka's on the Snye occupies. 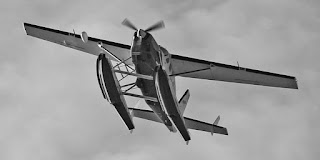 This particular float plane soared directly above Birdsong Studio a couple of weeks ago.  I rushed out with my camera and caught this view.

My son Ben popped out from the kitchen where he is working as a dishwasher.  He came out in his apron, inspected my progress, put his hand on my shoulder and went back to work.

As I started to wrap things up after an hour of painting I noticed that Eva's mom Vicky was in the house.

"I'll always consider you our family's saviour," I said.

It took her a moment to piece together what I meant.  During the Fort McMurray wildfire and evacuation in 2016, she found a way for Heather, Dylan and Ben to fly out of a camp near CNRL.  The relief knowing that they were going to be flown to safety was profound.  I had evacuated south during the crisis and was separated from them for a number of days. 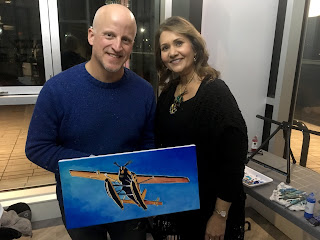 "Did you ever think we'd be here doing this?" asked Surehka.

Five years ago, we were working together in a completely different sphere.  She was the Chief Legislative Officer at the municipality and I was an elected official.  Wow!  How times change.  She has successfully created her dream on the Snye and a classy dining experience in a beautiful location.  I've become a full-time artist.  If you had asked either of us back then what we would be doing in five years, I doubt our current realities would have popped up. 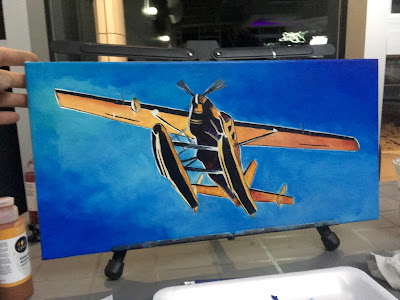 Both "Best Western Raven" and "Float Plane over the Snye" will be added to the United Way's online auction.  You can watch for it by clicking here.
Email Post