In days of yore, people often kept shoe boxes full of letters and postcards under their beds or in some secret spot high up in their closet.  These were hand written treasures that contained both stories and sentiments.  I am of a generation that still places value on these marvellous missives and have several scattered throughout my memory boxes.  Yes, I have several, though I tried to pare them down earlier this year.

There are several letters and cards that have come in during this four and a half year painting journey that I keep close.  I received another yesterday. 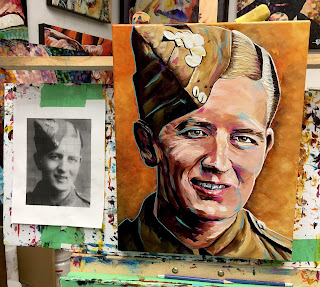 On Remembrance Day, I chose to paint Krista's grandfather Beaton Tulk.  He was a private in WWII who returned to Newfoundland after the war to his beautiful bride Leah.  Together they had five children.  Tragically, Beaton died of a massive heart attack at the age of 44.  Leah was left to raise the children on her own.  She never remarried.  Beaton was the one and only love of her life.

Fast forward about 50 years and Leah received word from Alberta that an artist had chosen to paint a portrait of her long lost husband on Remembrance Day at the suggestion of her granddaughter and it would be arriving at her door in Gander, as a special gift from afar. 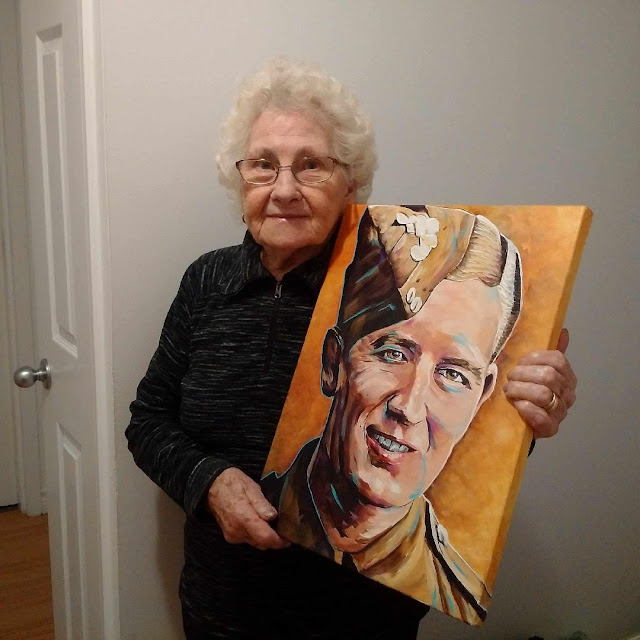 That painting did arrive, though a little later than planned because of the rotating postal strikes.  John and Brenda Kelly dropped by Birdsong Studio last week as they were in town, visiting from Gander, Newfoundland.  They wanted to share their appreciation and a photo of Leah with the painting.  During this lovely chat, they mentioned that a letter would be arriving in the coming days directly from Leah. 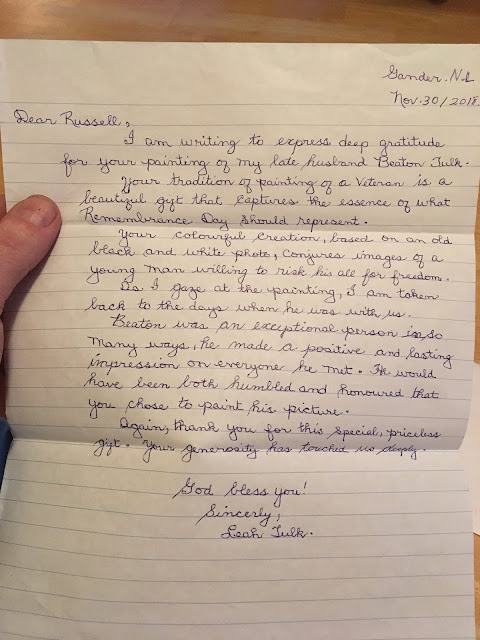 I don't think Leah would mind if I shared this with you.  Well into her nineties, Leah still has beautiful penmanship and a way with words captures the love she still feels for her husband and the pride with which he honourably served his country.

None of this would have happened if Krista had not shared the story and photo of her grandfather.  I am in her debt.  This letter from Leah is a gift that I will always hold dear.
Email Post