On rare occasions, I am asked to do paintings of subjects that would not be considered to be in my bailiwick.  The list of requests is small, maybe a dozen or so over 4 years of accepting commission requests.  Each one offered up its own set of challenges, questions and surprises.

Here are a few examples: 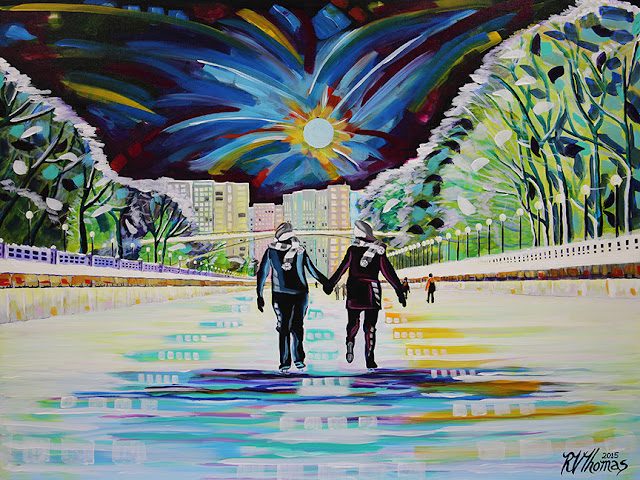 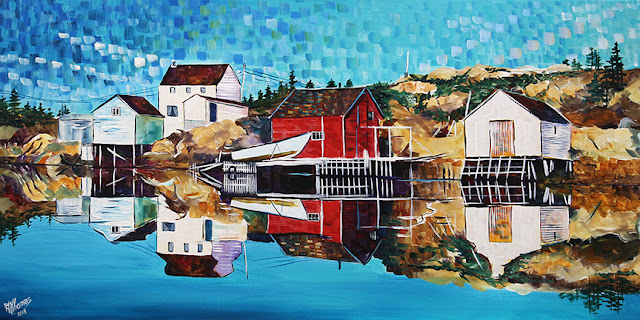 I was ask by my good friend Margaret to do a live painting as part of a goodbye party for one of her work colleagues.  She asked if I would consider painting a sailboat and gave me two source images from which to choose.  I was immediately drawn to this one.

In the days leading into the party, I had the project in the back of my mind, percolating.  At one point, I was playing with the idea of only using palette knives.  I'm not sure when that changed, but by the time the day came and I was packing things up to head out to the celebration a different notion washed over me. 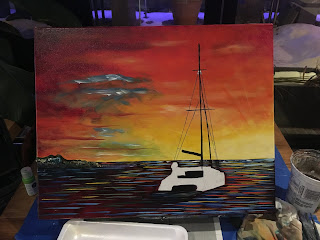 I felt an overwhelming need to move away blue/teal and go in an unexpected direction.  I started by laying down several layers of deep yellow, orange, red and purple.   I then added some random colour to the sky which ultimately led me to the horizontal bands of colour that formed the water.

"Did you have the vision in your head before you started?" someone asked.

"Not at all," I replied.  "I'm just allowing the painting to take me where it wants to go."

The sky, which formed first, informed the water.  I allowed the colours above to wash down on the surface of the dark purple and alizarin crimson that formed the base of the ocean.

"That's exactly what it looks like out on the water," said Andrea who was sitting nearby and watching.

I was a little taken aback as I wasn't intentionally going for something that would actually occur in nature, rather I was allowing the process to take the project where it needed to go.  I guess the process knew what it was doing.

I took the project home at the end of the night and put the finishing touches on the catamaran yesterday.  It will eventually be shipped off to Joanne's new home on Vancouver Island where sailing will be a big part of her new wet coast life.