It takes a community to raise a....stage 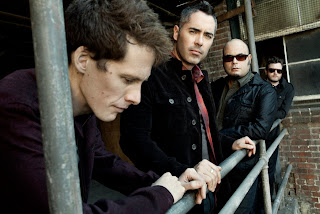 While I'm thrilled that we're heading home to Saskatchewan for a couple of weeks of much-needed R & R, I'm disappointed that we'll miss three incredible nights of music on MacDonald Island.
With terrific support from Big Spirit, MIX 103.7 and MacDonald Island Park, Events Wood Buffalo was able to attract the Barenaked Ladies for the CANADA ROCKS concert. Last here in about 1997, playing the infamous FlyDome, BNL has gone through a metamorphasis of sorts, sloughing off their party-prone frontman, Steven Paige. Their new album is awesome and is played profusely on the local radio station that plays "today's best music."
Opening for BNL is the talented country bombshell from Vancouver-Jessie Farrell. She stacked up the wins at this year's Canadian Music Association awards and is sure to impress the crowd, expected to be several thousand strong.
What began as a concert by the go-cart track on top of a flatbed trailer in 1995 followed by a brief fireworks display, has grown into its own as a major concert event featuring a number of acts including headliner Kim Mitchell on Canada Day Eve.
Taking full advantage of a state-of-the-art stage set-up complete with the A-List sound and light system, July 1st will feature Kenny Hess and Charlie Major leading into the feature performance by Dwight Yoakam.
All of this excitement is only made possible through the strength of community organizations coming together to make it happen.
"We can do so much more when we do things together!"
June 23, 2010
Email Post