I shut things down at 4 pm on Monday, packed up my computer bag and my cloth grocery bag filled with my workout gear, and darted outside into the cool, crisp air of a windy early June afternoon. As Heather had dropped me off in the morning, I decided a walk home would be great for my escalating body fat which has inexplicably jumped from 28 to 33 percent.

The progress of construction along my route continues to amaze me. Alberta Motor Products has built a titanic parkade just behind their main dealership, a five-story structure made from preformed concrete slabs that were swung into place by a towering crane. This is the biggest auto emporium I have ever seen, it comprises more than a full city block, buying up extra adjacent space over the years as their profits and fleet business soared.

Terracon is building a new three-story headquarters on the same street along with what looks to be another parkade-like project next to Canwest Propane. Three projects, tens of millions of dollars in construction, two blocks in a downtown with myriad projects on the build. The pace of progress is staggering. 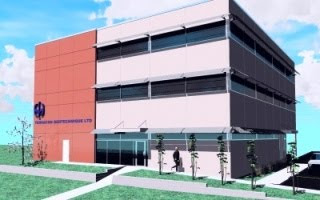 Walking along the west side of the loop road, things are starting to take shape with the marine park that has been crawling along for years. A children's play park is rising as part of the project along the Clearwater River, brightly covered ships and activities that attract the attention of my seven year old son Ben every time we drive by.

In the world of progress-yet-to-come, engineers and planners are still trying to figure out how to extend the loop road beyond the low-cost housing project and the old Sears location (now Napa Auto Parts) to Hardin or Morrison streets where it will reconnect with Franklin Avenue and a direct route to Highway 63 south or across the new bridge to the north. Some of those buildings will need to go away to make space for this arterial road project that will provide a much-needed alternate route through downtown.

I look forward to the day when a pedestrian-friendly boardwalk is in place, snaking around the path of the river, lit with classic streetlights, dressed with resilient park benches and surrounded by green rolling park space. I dream of the potential of the Clearwater corridor and the impact it could have on our citizens and the visitors to our community. That dream crystallizes a little more each time I stroll through. And while the pace of progress is slow, it is there--which emboldens by soul.