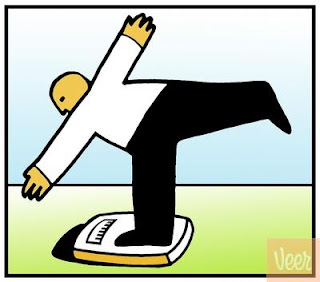 In recent months, it feels like I've struggled with keeping up with my fitness routine. While I managed to get to the gym almost daily in January, it has whittled down to two or three times a week now--if I'm lucky.
The other problem is that after a long, hot, hades kind of day, when someone offers you a beer it's hard to refuse. I really find that alcohol of any kind does an instant number on my weight.
Lastly, I tend to have a harder time sleeping in the summer, often getting out of bed to read late at night, which leads to eating late at night. Bad, bad, bad. By morning, with not enough hours to digest whatever went in, my weight is off the charts. Ugly!
So, right here, right now, I need to commit to returning to my regimen of not eating after 9 pm. I remember a good friend, now living in England, who said that cutting out evening eating was the key. I'm almost certain he was right.
I weighed myself when I got up and my eyes popped out of my head.
"That's impossible!" I thought out loud as it appeared to have jump three pounds overnight.
I weighed myself again, and a new number popped up, lower but still not low enough. I'm going to try one more time at the end of this blog post and write that number down no matter what -- my penance for over eating and not sticking to the plan.
June 3, 2010 - 196 pounds, 27. 4% -32.4% body fat...you decide, because the weight scale is unsure
Email Post