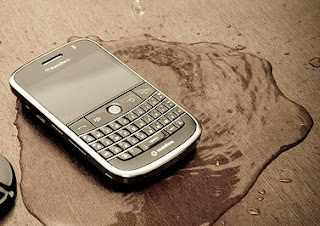 It happened so fast, releasing itself from the grip it held on my belt, falling helplessly into the water. It took about a millisecond to react, but no sooner had my BlackBerry hit the river I scooped it out and started shaking away the moisture.

In the initial moments following the shock, the BB stayed lit, refusing to acknowledge what had happened. But much like a luxury liner on its way to the bottom of the ocean, eventually the water is going to hit some critical piece of electronics and the lights are going to go off. Soon all was black and I was removing the back battery cover, starting to think more clearly.

I carefully laid things out on a log on the beach letting the sun do its business. But following some quick online research when we got home, I realize now that putting the battery back in to see if it would work was probably the wrong thing to do-circuitry, electricity and water are not a good combination.

The universal advice from the social media universe was to put the components in a baggie of rice and let it absorb the moisture. If things didn't get fried in the the initial start-up, it is concievable that you can breathe life back into a drowned BB.

As it sits quietly on a bed of rice, drying on top of the television, I'm wishing I could have a do over. If I only had made a different choice. There have been a sparse few moments in my life that I would play the do over card and this was probably one of them.

Certainly, there are moments of anger that I'd love to take back-several of those scattered over the ages though few in recent years. There was the time I was pushing my first wife's Ford Escort to a different spot in our driveway at Sproat Lake, west of Port Alberni-its battery had died and I needed to make room for another vehicle. Putting it into neutral, I was confident that I would be able to push the compact car where I wanted it to go. Little did I know that the slight incline would provide enough gravitational force to make what seemed easy impossible. The car starting rolling back on me as I desperately tried to jump in and slam on the brake. But it was moving too fast and all I could do was leap out of the way and watch it careen down a hill into the brand new car belonging to my aged landlords. SMASH!!! -a do over moment if there ever was one.
In reflection though, all things good and bad happen for a reason, and do overs would only inhibit destiny. My BlackBerry is figuring out whether it's going to live or die-pondering in purgatory. I'll trust its decision and carry on merrily.
June 20, 2010 193.4 pounds, 28.1% body fat
Email Post