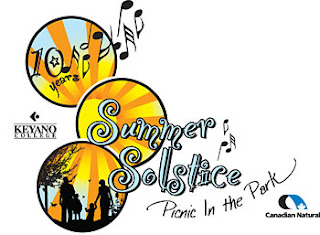 The Summer Solstice Picnic in the Park at Keyano College has become a family favourite and a signal that summer is just days away. The event began 10 years ago as a public celebration of the launch of the fundraising campaign for the building of the Syncrude Technology Centre. It was such a roaring success that then Manager of Public Relations, Linda Bucke, suggested that the college host a picnic every year. President Doug MacRae agreed and the rest is history.
Since then, Summer Solstice has grown and evolved, providing a wonderful few hours when you get to leave your wallet at home and enjoy! Our friends at Canadian Natural came on board as a major sponsor in year two or three and have been with us ever since. Not only do they provide financial support to make the picnic happen, they set up their own tent and participate in the fun.
I've been a part of Summer Solstice for the past decade, helping out with tents and organizing entertainment when I was the publicist at the Theatre, and supporting our Marketing & Communications staff who organize and execute the event now. In all those years, we've been rained on once, for about an hour while Mychela's band played. Everyone huddled under tents, enjoyed the music, then emerged to bright sun that quickly dried things up. That was probably six or seven years ago.
This year's Summer Solstice is especially cool. The Summer Solstice Star Search will feature 10 local acts, vying for big prizes. The esteemed judges who will be tasked with deciding winners include Claude Giroux from Events Wood Buffalo, Craig Picton from MIX 103.7 and Councillor Mike Allen from Campbell's Music.
One of my favourite elements of the event, an item we added about five years ago, is the High School Jazz Band Showcase. For about an hour and a half, we get to enjoy jazz ensembles from all three of our high schools. Absolutely fun and totally cool, these young musicians inject the park with energy and excitement.
This year, we've brought back the beloved Bridge Building Competition. Competitors build a bridge using Popsicle sticks that get tested with a hydraulic press to see how much weight they can sustain before SNAPPING! It's intense!
Last year, we stretched out the event a little later for the first time, taking advantage of one of the longest days of the year. Tonight, the DINO MARTINIS will take the mainstage, playing hits from the past 40 years. Their claim to fame is that they have a set list of over 1,500 songs, that they play without sheet music or charts AND in the key in which they were originally performed.
According to Pat McGannon from the band, they were playing a dingy bar in Los Angeles when something extraordinary happened.
"We were playing to a virtually empty house on a quiet night in L.A.," he said. "After the show we found out that an event planner was in the audience who came up to us to say we would be perfect for a party she was planning. We signed up, went to the gig, and found out it was a fundraising event hosted by actor Tom Hanks. It was quite a night!"
Of course, while the mainstage and bridge building fun happens, there are a tonne of other things for families to do. Our good friends from Jump N Shout will have some inflatables in the park. Four face painters will be scattered throughout the park (if there is one thing I've learned about planning these kind of events over the years-you can NEVER have enough face painters). There is a magician, balloon artist, stilt walker and street performer to keep you laughing while you wait in line for your free and delicious barbecue dinner courtesy of Ovation Catering & Banquets.
Believe it or not, we also have the Vacouver Aquarium represented at Summer Solstice in the "Living Waters" tent. Also, the Edmonton Oilers promo squad will be here with some fun activities and prizes.
Speaking of giveaways, get ready to flock to the front of the mainstage around 7:30 pm. That's when we'll be tossing out a whole bunch of great prizes.
The 10th Annual Summer Solstice starts at 4 pm in Doug MacRae Park at the corner of Franklin and King. Parking is available in front of the Theatre and Arts Centre, Bob Lamb Industry Education Centre and the Syncrude Sport & Wellness Centre. And, for today only, parking is FREE!
June 18, 2010 - 193.4 pounds, 29.2% body fat
Email Post