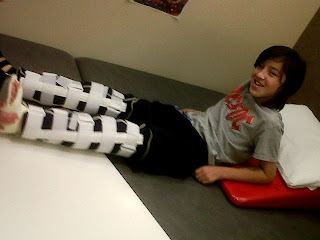 I took the stairs up to Unit 201 at the Glenrose Rehabilitation Hospital, eager to see Dylan after what had been a long, long month. Coming in the big double doors of the recreational common area, it was strangely silent, not a nurse or patient to be seen, just large empty tables. So, I continued on to the nurses station to find out where he would be at 10 o'clock in the morning on a Wednesday.

"Let me check," said the diminutive nurse, as she checked the patient schedule etched out on a whiteboard on the wall opposite to where I was standing. "He's in OT right now, Occupational Therapy."

"You're Dylan's dad," said another nurse, starting to walk by me in the hall. "He's so excited to see you. You just missed him walking. He did over 100 metres today."

She escorted me to a different part of the hospital where we found Dylan in a back room working on a computer with the occupational therapist. His face lit up with a big smile and his arms reached out as we reconnected with a big hug. I knew in that instant that the long drive, dangerous curves and near death experience were all worth it.

He was working on a typing program, learning to use all his fingers on the keyboard while looking at the screen. While he was going slow, he was doing it! From OT we drifted into PT, or physical therapy, where Kristen and Kelsey put him through his paces, stretching, pulling and eventually, walking. 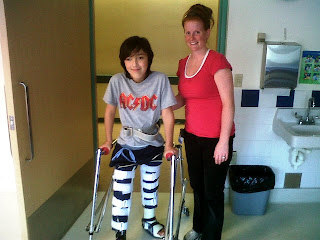 For now, walking means using a walker and having both legs in Zimmer splints, locking the knees in a straight position. The bending of the knees is confined to the PT mat in small and careful increments. The list of procedures he had done in the OR is long and involved some intricate work on ligaments associated with knee function. All of that said, he stepped into the walker and with legs locked straight, began ambling his way from the PT room back to his bedroom, Kelsey following behind with his wheelchair. 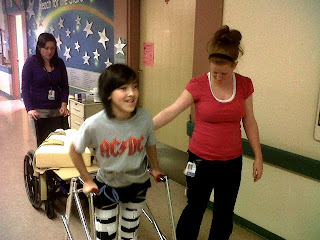 Dylan is right at home here; it is obvious! He engages each nurse as he passes them, often by name and always with a bright smile. His room is neatly organized with WWE action figure collectibles lining the window sill, as if on guard over his territory. A box set of Marvel movies sits proudly next to his bed, a gift from his new friend Sharon, who popped in for a visit the week before. (Sharon is a former student at Keyano who painted the large abstract that has been on my office wall for the past four years)

We have a family conference planned with his docs in about 10 days, a chance to find out about his progress from the clinical point of view. Dylan says that the jury is still out on whether he'll be able to come home permanently by Christmas. If the physical therapy is not quite finished, he may need to return to Unit 201 after the holiday for the final leg of his recuperation journey.

His condition seems a stark contract to two years ago when he had his first surgery. He seems to have progressed much more rapidly and he appears to be entirely comfortable and content in his surroundings. Mind you, he is two years older, and wise beyond his years; that makes a big difference.

We were sitting enjoying our last few minutes together when Kim, the social worker, came in with a print out of the front page story from the Fort McMurray Today the day before about the Swearing In Ceremony. He had highlight the parts about Dylan and my emotional speech. It was a nice touch. While I had told him the story, seeing it in print made it a little more special. 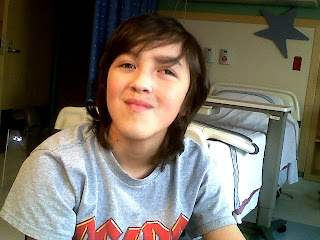 One final hug, and by 3 pm I was going down the stairs, out to the street and back into the car for the long trip home.
Email Post