I had no warning that I would break down and cry in front of church full of people this morning, no glimmer of possibility, no indication that a whole bunch of emotions had piled up. The McMurray Gospel Assembly had invited all the candidates to attend one of three services this weekend to introduce ourselves and our families to their congregation. I can't tell you the last time I'd been through a church service, but I can pretty much guarantee it was attached to either a wedding or a funeral. Despite that reality, I was pleased to be there and felt completely at home surrounded by friends and familiar faces, and others who were strangers but totally welcoming.
After a number of beautiful worship songs, Pastor Glen Forsberg invited the candidates in attendance for the upcoming municipal election to the front: Mayor Melissa Blake, Councillor Phil Meagher, candidate Jane Stroud (Ward 4) and myself-mayoralty candidate Joe Nebesny would arrive a few minutes later.
The microphone was handed to me.
"Hello, I'm not Don Scott," I began, "though many people mix the two of us up; we go to the same hair stylist." As the similarities between Don and myself are indisputable, pointing out the obvious always seems to loosen up the crowd. Laughter filled the church.
"I'm Russell Thomas and I'm running for Council in Fort McMurray, Ward 1 of the Regional Muncipality of Wood Buffalo," I continued. "My family and I are actually neighbors of the Gospel Assembly Church, we live two blocks that way," as I thrust up my arm and indicated the direction of our house. "I'm married to Heather and we have two sons, Dylan who is 11 and Ben who is 7. Dylan had a major surgery about a month ago and Heather and Ben are down in Edmonton with him today..." Then it hit me.
Like a crashing wave, my eyes filled with water and I was left unable to speak. I dipped my chin, trying to summon my voice back and my lost composure, but I couldn't do it. I passed the cordless mic over to Melissa who carried on brilliantly.
My candidate colleagues have been very supportive and empathetic about our situation. But as things have been moving so fast, so constantly, I hadn't felt the emotional weight until this morning.
As a group of pastors and church elders gathered behind the candidates to say a blessing over us, my eyes were still wet, my heart filled with this group of friends and strangers who had connected to something intensely personal for me.
"And we pray for 11 year old Dylan," Jack prayed. "That he may enjoy a full recovery in hospital in Edmonton."
As I pulled up my calendar today, trying to find an opening when I could swoop down to Edmonton to visit my son, the first ray of hope was November 11th, Remembrance Day. There is maybe one weekday before then when I could theoretically fly down in the morning and return the same evening. I may look at doing that as November 11th is a full month away, far too long. 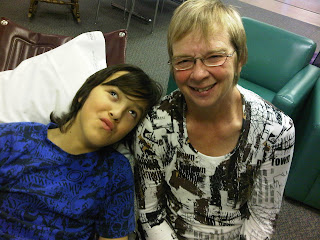 Heather sent this picture of Dylan and Grandma Wagner this morning. His playful eyes lifted my spirits and soothed my soul. I'll be thinking of him lots as we go through the final week of this campaign, knowing he is off in the distance, cheering me on from Unit 201 of the Glenrose Rehabilitation Hospital.
October 10, 2010 (10/10/10) - 199.8 pounds, 33.3% body fat
Email Post