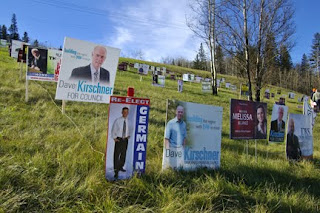 The idea popped into my head on Friday. By Saturday afternoon I had thrown it by Don Scott, Mayor Melissa Blake and several others. On Saturday night I tossed it by a few more candidates. By Sunday morning the invitation was sent out and on Monday at noon we began the V-O-T-E Project.
Side by side, we put up our assortment of election lawn signs over top the letters V-O-T-E that had been traced out with string and rope on a hill alongside Highway 63 in downtown Fort McMurray. Several hundred signs later, representing many of the campaigns for Mayor and Council, the message was spelled out for all to see.
It felt like a real community effort, as we celebrated Thanksgiving Monday reminding the public of the enormous gift we have to be able to vote in Canada. 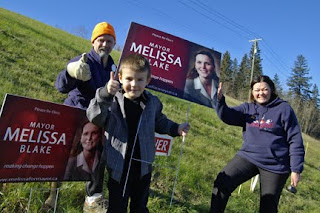 "We absolutely need to get people out to vote," said Zafar Iqbal, organizer of the Express Media Mayoralty Debate on Saturday night. "There are a millions of people in nations around the world who die fighting for the opportunity to choose their leaders."
So, for several hours, we put aside our differences and focused on the things we have in common, including a passion for our community, our region and the democratic process. We picked up sledge hammers and staple guns and put up signs, some were ours, many were those of the competition. We walked up and down the big hill, happily sweating in the hot October sun, intent on working together to turn a vision into reality. 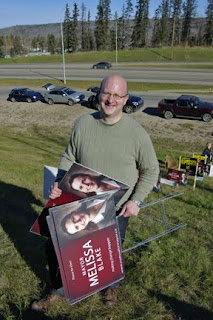 It was a simple idea that was embraced (and enjoyed) by many, proving once again that we can do so much more when we do things together. Happy Thanksgiving!
Email Post