The race to the finish 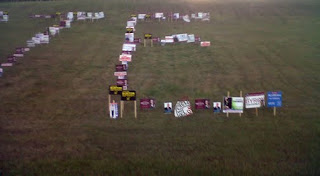 We are in the final days of an election campaign that officially began the day we went down to Edmonton for Dylan's surgery, but truly began months before that in one form or another. You may wonder what a candidate goes through as the day gets closer that will determine his or her fate. Excitement mixed with fear, confidence peppered with doubt, elation followed by anxiety, it's all there floating in and out of my psyche, unannounced and uncontrollable.
A high point for me was the construction of the V-O-T-E Project with many of my candidate colleagues. I'm thinking of the smile on Christine Burton and Phil Meagher's faces as they pounded in the stakes for Mayor Blake's sign. I'm thinking of Don Scott walking up and down the steep hill, beads of sweat rolling down his ample forehead in the hot October sun. I'm thinking of Dave Kirschner, rolling up his sleeves alongside my good friend Julio to fill in all the empty spaces in the letters. I'm thinking of Ross Jacobs and John Vyboh rolling in to the rescue with the last few signs to put the finishing touches on what turned out to be a great show of teamwork.
Ross called me earlier this afternoon to let me know that the letter E had been all but destroyed. At first, I was ready to raise the white flag and give up on the project. But Kyle Harrietha, the sign King volunteer with the Blake campaign, said that it wasn't as bad as it looked and that fixing it wouldn't take very long. He was right. It took about 40 minutes of putting and pounding signs back into place, and the E was put back in V-O-T-E.
The hardest part of this thing is the inevitability of elections, that there will be times when you don't get picked. That takes some getting used to. But, at the end of the day, win or lose, I will hold my head up high and know that we ran a solid "us" campaign. I was proud and honoured to shine a light on my colleagues and the process.
In all ways, Monday will mark a crossroads in my life. I'll either get swept up in the business of Council or find myself with an incredible amount of time on my hands. The decision of which fork in the road I will take is up to thousands of voters in Ward 1 of the Regional Municipality of Wood Buffalo. Into your hands I commend my future!
Email Post