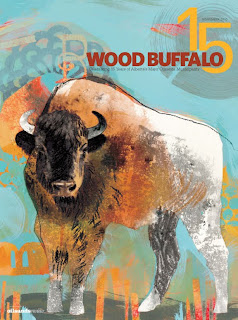 Heather said to me, "I hope it isn't like this when you win." Every night this week I've had to dash off to committee meetings, campaign events or celebrations.
It's absolutely clear that in a dynamic community like Wood Buffalo you could be out doing things every day of the week. But, I'm going to make sure to carve out a healthy amount of dedicated family and spouse time; it is essential.
Last night, my friends from JuneWarren-Nickles Energy Group and Westbrier Communications (Rob, Agnes and Phil) hosted the annual Oilsands Banquet, this year celebrating the 15th Anniversary of the Regional Municipality of Wood Buffalo. It was an impressive gathering of current and past leaders, industry representatives from near and far, and elders and leaders from our First Nations and Métis communities. It was particularly nice to have a brief visit with 93 year old Elsie Yanick. She shared an eloquent and heartfelt blessing to begin the evening.
The story of the formation of the Regional Municipality of Wood Buffalo was told by former CEO of Syncrude Canada Ltd., Eric Newell, in his keynote address. Discussions began in 1992 when it became clear that something would need to be done as the fiscal realities of declining government funding on the horizon and a taxation and governance system that was ripe with challenges combined to paint a bleak picture for the City of Fort McMurray and Improvement District No. 18.
Chaired by then Mayor and current MLA Guy Boutilier, a committee was struck to discuss solutions. Around the table were luminaries like Doug MacRae from Keyano College, Iris Kirschner from the school board and Eric Newell from Syncrude. Working closely with Steve West, Minister of Municipal Affairs, amalgamation occurred in 1995 creating the largest municipality in North America.
Mayor Melissa Blake was articulate and compelling in her address, sharing her sense of awe of being at the head table with leaders who she looked up to in her youth. Scott Sullivan, President & CEO of Syncrude, expressed appreciation for being able to hear the amazing story of the formation of this great region from the man who lived in his shoes for so many years.
It was great to see the return of Glen Laubenstein to Fort McMurray. He will assume the role of CAO at the beginning of November, transitioning from the City of Winnipeg where he held a similar role. During his time as Regional Manager, Glen and I had three connection points: on a public relations level as I was Program Director of the OK Radio Group, on a community level as I was President of the interPLAY Festival, and on a personal level, as I performed on the stage with his daughter Sarah, now a reporter with CBC in Manitoba. Talking with him, it was crystal clear that he is excited to get started and face the challenges and opportunities of the future. There was a definitive sparkle in his eyes.
The week of evening activities that included The Global Address with Dave Collyer at Keyano College, the Mayoralty Debate in the Recital Theatre, a Northern Classic committee meeting, a visit with the residents of Waterways and the Oilsands Banquet, will wrap up tonight with the opening of Dracula at Keyano Theatre. Then, we drift into Thanksgiving weekend, election sign repairs and a visit to the McMurray Gospel Assembly. Whew!!!
October 8, 2010 - 198.2 pounds, 35.6% body fat
Email Post