Cameron was born into a normal family in Vancouver 42 years ago.  It was a loving, supportive home, which is to say the events and addictions that would overtake his world were independent of, and not related to, what happened in the home.

"I've spent the last 25 years as a drug addict," he said, telling his story to a hall full of people attending the KD (Draft Dinner) Gala as part of the local United Way campaign.

Doing the math, some time during his teenage years, Cameron fell into the East Hastings and Main world of Vancouver's downtown eastside where "people were sick," he said.  "Sick and dying."

When a girlfriend suggested they move to Fort McMurray to pursue a job as a heavy haul truck operator, he saw it as an opportunity to cut off the supply to his habits.

"I looked on the map and saw that Fort McMurray was in the middle of nowhere."  They wouldn't have access to the plethora of drugs available in the big city way up there, he thought to himself.

"But I soon discovered they had drugs.  They were just different drugs."

He had a clean period, early in his tenure in Fort McMurray which began 7 or 8 years ago, but his sobriety slowly devolved into a long slow decline into giving up everything to feed his habit.

"Eventually it was just me sitting on a plastic crate, all my stuff gone."

Cameron spent years living in a tent, "usually behind Reidel there, in summer and winter."

Behind Reidel, for those reading this blog post not from Fort McMurray, is a forest, a place to escape the wind relatively close to downtown and the Centre of Hope, where those in need can grab a shower, fresh underwear and socks, and support (if they want it) to get a new start.

The girlfriend he followed long since gone - "She booted my ass" - Cameron took up with another lady, part of the roaming homeless, and fell in love.  They were together for quite some time, as he described, getting high and trying to survive.

On a particularly cold night just over a year ago, after smoking some crack, they sought some relief from the cold in the dumpster behind the Centre of Hope. 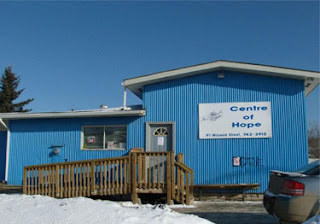 So, throughout the night, he paced around, checking in on her from time to time.  He was looking forward to McDonald's opening up so he could get a slice of warmth and a cup of coffee.

"I grabbed a block of wood to keep the lid open just a bit, so she could get some air and some light."

Eventually, he lifted himself over the lip of the dumpster to once again check on his girlfriend and ask if she'd like a cup, before heading off down the block to get in the line that invariably forms when the doors open.

"It was quite a long line-up that morning and it took me awhile to get back," he said.  "When I got there the dumpster was empty.  I just figured that she had went off to do some more drugs.  Maybe some guys came by?  I don't know, I just didn't give it a lot of thought as she would often take off for a couple of days."

Eventually, he started to get quite worried, as he didn't see or hear about her for several days.  He asked the staff at the Centre to check their surveillance video.  Watching it confirmed his story.  It showed them going into the dumpster, him getting out and him checking on her a number of times throughout the night.  It also showed when he did his final check before going to McDonald's.  Then it showed the garbage truck.

It is a haunting and hurtful image - death by dumpster.  He was incredibly composed telling the story, scratching himself constantly, up and down his arm, his sides and shoulders.  And despite a quarter century of drug abuse, Cameron looks in remarkably good shape for a guy just a few years younger than I.  He's been clean for 7 weeks now, though you can't help get the sense that he is still teetering on the edge of the abyss.

"At the Centre of Hope the doors were never closed to me," said Cameron.  "I don't know where I would be without these wonderful ladies who are there at all hours, on their days off, whenever they are needed.  They really care."

The statistics that flashed by in a slide show presentation really tell the tale of the Centre of Hope:  17,000 client visits last year, over 12,000 pairs of socks handed out.  You can learn more about the stats by clicking here. 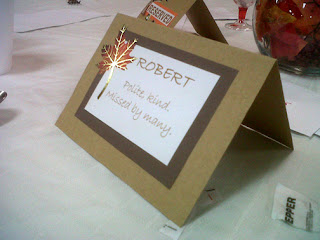 At every table was a placard with a name and a message.  These are the fallen, clients of the Centre of Hope who succumbed to the elements, to their addictions, to the garbage truck.  There were quite a few tables there last night, some with more than one placard.  Among them, most assuredly, was Cameron's lost love, who still tugs at his heart and encourages his recovery though she has long since passed.

"Maybe you could say a prayer for her," he asked.  "I'm not a praying type of person, but I'm at that point where I'm willing to accept anything that might help. Thank you for listening."