The Lights of Christmas

In preparation for the event, Keyano enlisted the support of our partners at Events Wood Buffalo and the Regional Municipality of Wood Buffalo to help us light up the corner of Franklin Avenue and King Street. Municipal crews were on site during the weeks leading up to the event, stringing up additional lights. Keyano Theatre staff prepared the technical infrastructure and the “brains” to run the animated display. Events Wood Buffalo crew put up tents and arranged catering and other details.

As Ben and I drove to Doug MacRae Park on Saturday afternoon, we really didn’t know what to expect. But as we got closer and closer to the College, every parking spot, every nook and cranny was filled with vehicles and people were pouring on to the Clearwater Campus. 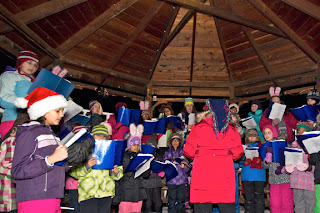 It’s hard to guess how many people were gathered around the gazebo as President Nagel, Santa Claus and I pulled the switch to turn on over 100,000 bulbs and a lighting presentation choreographed to a high-energy rendition of Jingle Bells. All I know is that there were families everywhere and that there were oohs and aahs in abundance as the lights danced and spirits soared.


The thousands gathered in proximity to Doug MacRae Park moved en masse to Franklin Avenue as the Parade Marshall gave the impressive collection of over 40 floats the official signal to get started, adorned with a multitude of colourful lights, bright holiday music, brilliant smiles and buoyant waves. 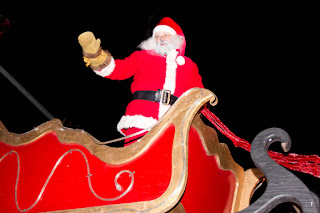 This was a new route for the annual Santa Parade. Last year, things began at Borealis Park and ended on Reidel. This year, the festivities began at Home Hardware, passed Keyano College and proceeded down Franklin before turning on to Reidel Street and returning to their marshaling area on Prairie Loop Boulevard. And apart from one quieter stretch, there appeared to be tens of thousands out on a magical Saturday night in Fort McMurray, enjoying what has become a regional holiday tradition.
Email Post