The Magic of Gala You could walk from one end of Gala to the other and back again, and completely not see dozens and dozens of people who the next day will insist they were there.  As one guest noted, "there is no other event like it."  It is a far cry from your sit down shwanky shwank affair (did I just use shwanky in a sentence?) and starkly different than your standard hors d'oeuvre reception-type function.  In many ways, the Keyano College Foundation Gala is the confluence of the best elements of all the black-tie possibilities, brilliantly executed by a crack team of professionals and volunteers.  After 30 years it has established itself as the premiere evening in our community. 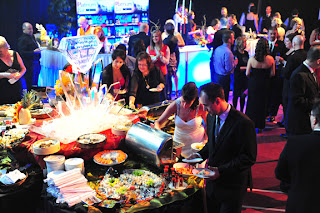 Gala 2011, the Diamond Anniversary "Romancing the Stone" edition, did not disappoint.  The design and decor was the best its ever been.  The entertainment line-up featuring Honeymoon Suite and Streetheart kept the twelve hundred guests dancing longer than ever before.  And the live auction items inspired unparalleled generosity, including a $50,000 bid for the Marty McSorley "Explore L.A." package.

The allure of Gala is a little different for everyone.  Some like sampling the incredible delicacies, succulent servings of exotic delights prepared by Chef Clarence and his incredible staff at the Sawridge Inn & Conference Centre.  Heather enjoyed darting from station to station sampling the sundry sensations that were in abundance.  I'm not a big eater at these things, never have been.  I tried a sampling of frog legs, just to say I did.

Some people love Gala for the shopping opportunity.  A long and luxurious line of silent auction items tempted and titillated, as guests imagined what this painting or that chaise lounge would look like in their great room or dining area.  They returned to the items of their longing throughout the night, determined to end the event with the highest bid.

Others basked in the glory of the music.  Fans of the featured acts flocked to the stage and enjoyed the rare chance to shake it up mere inches away from the icons of their youth.

I liked the opportunity to visit with a diverse cross section of people, though I found myself bereft of voice after a couple of hours of trying to be heard above the pervasive din of the crowd and the sound system.  It was nice to run into several Leadership Wood Buffalo alums, visit with Syncrude's Scott Sullivan and Suncor's Mark Little, meet some new friends and reconnect with many old ones.  For me and many others, Gala is all about the social opportunity.

"I've made it halfway down the hallway," said Mayor Blake, beaming from ear to ear, enjoying the constant turnover of guests wanting to say hello as her and Peter, her partner, tried to get over to the next field house.

Later today we will get final word on how much money was raised by the Diamond Anniversary Gala.  It is very likely that it will be a record amount, fueled by amazing live and silent auctions, and by the record number of sponsors that came to proverbial dance.  But apart from the money, it will be the moments, memories and friendships that will reverberate for days, weeks and months to come.
Email Post