We were driving home the other day, my eight year old son Ben and I, when the radio ad for the Syncrude Arts Alive presentation of Sursaut At Nightfall came over the airwaves on MIX 103.7.  The show is being performed twice at Keyano Theatre & Arts Centre this Saturday afternoon, at 2 pm and 4 pm.

“…discover a magical underwater forest,” said the voice on the radio – an award-winning commercial voiceover artist from Victoria named Ross McIntyre – as we made the turn on to Franklin Avenue from MacDonald Island.

“Are we going to that?” asked Ben.

“Did that commercial make you feel like you want to go?” I asked.

Ben never comments on things he hears on the radio, so to say that he had my attention would be understating my reaction.


“I first saw Sursaut At Nightfall at the Vancouver East Cultural Centre as part of the Cultural Olympiads during the Vancouver Olympics,” said Claude Giroux, Artistic Director of Keyano Theatre & Arts Centre.

“It immediately struck me then as a totally unique gem of creative expression that would appeal to a youth and family audience.”

That said, the company based out of Sherbrooke, Quebec, refuses to dumb down their family-oriented performances, choosing to challenge and lift up their audiences.

“We want to keep it accessible but profound and inspiring,” said Adam Dymburt, Artistic Director of Sursaut.  “That’s what really works.” 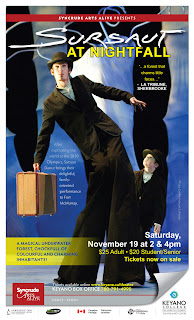 The story, wrapped in a magical set and a stunning lighting design and told through contemporary dance, follows a workaholic shoemaker, Auguste, who knows nothing of holidays and is only comfortable in the familiar confines of his workshop. When he enters a water forest populated by tiny creatures - crazy, tender, tipsy or delicate – the begins to go through a remarkable transformation.  He becomes absolutely charmed, as will the audience.

“I was inspired by the absolute mastery and skill on display perfectly echoed by the OOOHs and AHHHS all the way through the performance,” said Giroux.

“When it was over and the entire crowd stood up and cheered I knew I wanted to see this show in Fort McMurray and share it with my community. This is a rare opportunity to see something truly special!”

Sursaut At Nightfall features a talented cast from a world-renowned company that has been producing unforgettable performances for the past 25 years.

“This is as much about bringing your children into a magical underwater realm as it is about exposing them to the beauty of contemporary dance,” said Giroux.

Something about the picture that was being painted by the radio ad grabbed the attention of my son in a way that I had not seen before.  I know where we need to be on Saturday afternoon.