New York has Times Square, Philadelphia has Independence Hall and the Liberty Bell, but in San Francisco, it is Alcatraz that draws people in, by the thousands daily.  One would think that on a day with rain falling from sunrise to sunset that demand for tickets to visit this historic rock in San Francisco harbour would subside.  No such luck. 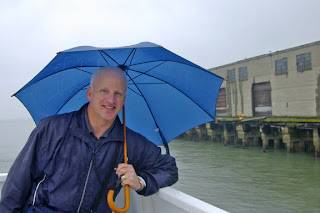 We squeezed onto the ferry early in the afternoon, grabbing a piece of real estate on the top deck, umbrellas protecting us from the pelting rain.  People from all over the world were joining us on this short 20 minute excursion to one of the most famous maximum security prisons in America.  Though it closed almost 50 years ago, it remains as one of the city's top tourist draws.

As we entered the main building and circled around the showers to get our audio units and headphones for the self-guided tour, the thought that some of the most notorious criminals of the previous century would have been cleaning themselves en masse right next to where I was standing was a little creepy crawly; I'd be lying if I said otherwise. 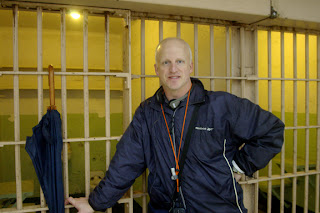 Walking down Broadway, the centre hallway lined with cell after lonely cell, stark with a sink, toilet, bed frame, fold down table and bench seat, the murmurs and machinations simmered in the background.  The audio recording, complete with the sound of jail cells closing and inmate protestations added an eerie sense of reality to the experience.

Listening to tales of Robert Stroud, the famous "Birdman of Alcatraz", Al Capone and George "Machine Gun" Kelly standing right next to where they laid their heads every night for years was surreal.  Being mere feet away from where three prisoners (Frank Morris, John Anglin, and Clarence Anglin) chiseled their way through the air vents on the back walls of their cells enabling their passing into the adjacent utility corridor, up to the roof and into the water to an end that we'll never know, was worth the price of admission all by itself.

Prisoners came and went during the 29 years of its operation as a federal prison (1934 - 1963), over 1,500 in total.  Four wardens and countless guards and their families called this 22-acre island home during that time.  And while it's hard to imagine what it was like, as many of the out buildings are crumbling, mere shadows of their former selves, this was a community.

Standing in the administration office, staring into the control room, it was easy to imagine the chaos that ensued when guards realized that three beds were being occupied by fake heads and that an escape attempt had actually succeeded.  As they scrambled to read escape procedures, you could almost feel the elevated heart rates and adrenalin, ripples of anxiety and excitement stretching across the years.

Attorney General Robert Kennedy signed the death knell of Alcatraz, a decision to close the facility made out of escalating costs and a deteriorating infrastructure, not to mention a community that was tired of raw sewage from the Rock being dumped right into the bay. It was closed as a penitentiary on March 21, 1963.

I'm glad we went.  The audio self-guided tour thing was awesome, elevating the experience in a way that I really enjoyed. History was brought to life on this Alcatraz adventure and I would highly recommend it for anyone visiting San Francisco.  I suspect, owing to day after day of sold out tours, that many others have done exactly the same.
Email Post