TEDx - the energy you give 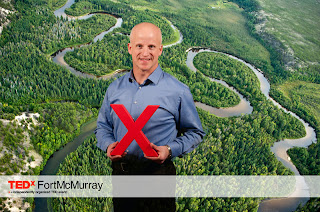 Pacing backstage in the moments leading up to my TEDxFortMcMurray presentation, I was doing everything I could think of to get my emotions in check.  "Breathing. Breathing. Breathing," I texted my wife who was out of town on a course and unable to attend the inaugural inspiring speakers event in our community.

I shared my excitement and shaky demeanor on Facebook and messages of support began appearing from friends and family, near and far, assuring me that it was going to be great - each message another release valve for the well of feeling that was bubbling up inside of me waiting to get out.

When David Sabine came off the stage after his presentation, he effused that "it was so much fun."  He added that the audience was extremely responsive.  Hearing those words emboldened me and prompted somewhat of a reset in terms of how I was preparing.

I began moving away from thinking of the stage and the experience as me making a presentation to them, toward me making a presentation with them.  Much like my social media timeline, success or failure would be defined by my ability to include the audience as part of the story.  It was a fundamental shift in thinking, and while my script lent itself to audience connectivity, it hadn't settled into my core until I was stage left leaning against the grand piano in the dark, feasting on the energy being shared on the stage by my dear friend Julie Funk, presenting on her powerful love for Fort McMurray.

With less than a minute left before emcee Matt Youens would invite me on the stage, I began toying with a slight variant to how I was going to open.  All along, it was going to be a simple "Good morning," followed by the question about the artist who painted the piece in my opening slide. 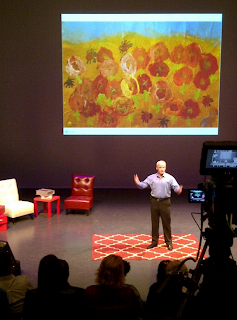 The video of what actually happened may prove otherwise, but I think "Good morning," became "Good morning friends," followed by "Facebook friends," and "How many people are on my Facebook?" - at which point a majority of hands in the audience shot up - followed by "Twitterites" - as a healthy number of hands once again reached for the heavens.  The ice had been broken, my nerves released into the earth.

As I moved through the story, from how much has changed since 1975 to watershed moments and beyond into my discovery of Facebook, it was great to make eye contact with people I knew in the audience - just enough house lights were up to make those visual connections possible (thank you!).

I felt great as I dived into the Dylan Surgery Adventures, describing the genesis of my social media writing journey, and very personal Facebook notes that chronicled two weeks in the fall of 2008 when my oldest son had a major leg operation in Edmonton.  I was a blubbering fool after recounting the tale in episode 4 when after helping clean him up after he "worked things out" on a wheelchair commode he asked for a hug and said "thank you for helping today."  Based on what I heard at the break, I wasn't the only one having a hard time holding it together; mothers and fathers alike made a very personal connection to that moment.

"Did I make you cry?" I asked Mayor Blake jokingly during the lunch intermission.

"You know the amazing thing is that I remember reading that story," she shared.

It's an incredible compliment when someone remembers something I wrote last week, let alone something I posted almost four years ago. 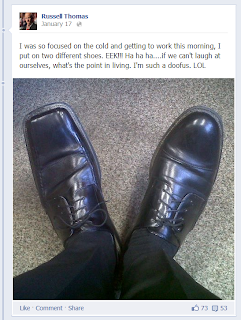 Another person came up and shared the fact that he had heard about the day when I went to work sporting two different pairs of shoes.  His wife had done the exact same thing the day before I did.  I guess at the end of the day we're all human, and there is something very compelling about having the courage to admit that truism.

The other resonant thought that occurred as we enjoyed a full day of ideas worth sharing, is that we all have a story that deserves to be told and heard.  TEDxFortMcMurray provided a brilliant forum for beginning that process of unearthing stories that matter, stories that deserve to be out there in the world via the power of the Internet and YouTube. 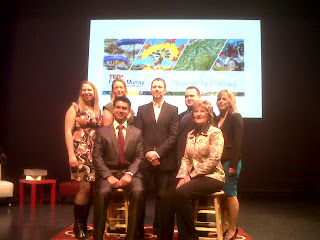 I can't say enough about the people behind the scenes who put this incredible event together.  As a Leadership Wood Buffalo case study project, it provided a wealth of learning and an abundance of community impact.  You should all be very proud of the results: Gaurav Gupta, Jude Groves, Karen Puga, Matt Youens, and Michelle Landsiedel.  A big thanks to Renee Summers, Ken Chapman and Loraine Humphrey who contributed as part of the organizing committee, and to all the volunteers and sponsors who gave their valuable time and support.

The next step for all of us is to share these presentations when they are released on video in the next couple of weeks.  Together we can leverage the power of these transformative ideas and compelling stories to help create a better sense of understanding of Fort McMurray and life in one of the most dynamic regions of the world.
Email Post