Dylan strode to the front of the banquet hall as his name was called, swinging his legs with a fury to join several other young people from the various school districts who were being lauded as junior achievers.  He tried to traverse the two steps up to the platform but tripped up slightly as his right foot caught the upper lip of the stage.  I came over, offered my arm, and Dylan lifted himself up and seamlessly closed the distance between himself and Geraldine Carbery who was presenting the awards on behalf of the Fort McMurray Catholic Schools.  It was a proud moment, among many in my young son's life, but one that felt extra special. 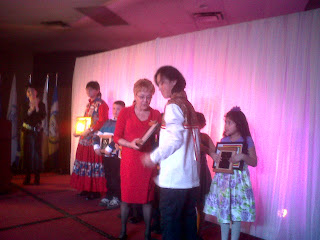 The room was packed, with probably 500 people, enjoying the 24th annual Regional Aboriginal Recognition Awards.  We had already enjoyed a fine meal and a keynote address by Olympian Billy Mills, who became the first American to win gold in the 10,000 metre event at the Tokyo games of 1964.

The theme of his talk was "perceptions" which he brilliantly threaded through multiple story lines leading to his captivating play by play memory of that iconic race.


In order to have a chance, he would have to lop off two full minutes off his previous best time. Despite the fact that with just a handful of laps to go he was with the front of the pack, he was seriously doubting whether he had it in him to go the distance.

Just one more lap, he thought to himself.  I can do this.

He described channeling the strength of his people, his family, his culture, as he spun around that final corner in Tokyo, the tape of the finish line within sight.

Still trapped in third position, he glanced over to the German runner next to him and locked his eyes on the image of an eagle on his shirt.  For Billy, the sight of that sacred bird was a sign and the final lift he needed and I can do this became I can win, I can win, I can win.  As one runner moved over to lane four, Billy zoomed by in lane three, and concluded one of the most most thrilling running events in Olympic history.

As the dust settled on the celebrations he made his way over to the German runner to explain how he had inadvertently helped give him the final lift.  Explaining those final few moments to his fellow athlete, Billy glanced down to that spot on the shirt and found...nothing. 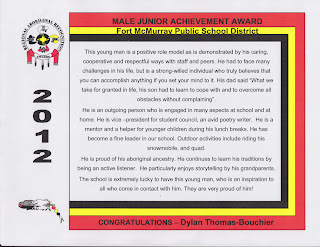 In Dylan's introduction, the announcer referenced a comment that I had made that "what we take for granted in life, (Dylan) had to learn to cope with and to overcome all obstacles without complaining."  With the physical challenges that come with cerebral palsy, getting up, walking through a crowd of 500 people, and trying to get up a pair of stairs with no railing to hold on to, is a whole different experience for Dylan than it would be for us.  As his brain is so focused on moving his limbs and staying upright, he often misses those little cracks in the path and ends up falling.  But just like he did last night, with dignity and perseverance, he gets back up and keeps going.

"This young man is a positive role model as is demonstrated by his caring, cooperative and respectful ways with staff and peers," reads the framed description he received last night.  "He had to face many challenges in his life, but is a strong-willed individual who truly believes that you can accomplish anything if you set your mind to it."

In the same way that Billy had to reach within his soul for the extra strength that made him an Olympic hero, Dylan does the same, every day.  And while he'll likely never win Olympic gold, he's changing lives in other ways.

"The school is extremely lucky to have this young man, who is an inspiration to all who come in contact with him."

This was a big deal for him.  To the caring teachers who took the time to nominate him, thank you.  Dylan's heart was full last night, surrounded by family and friends and being acknowledged in this meaningful way.

"Follow your dreams," wrote Billy Mills in the margin of the program, a lasting memory and reminder for us all, that anything and everything is possible.

In the end "it's the journey, not the destination that empowers us," said Billy. No truer words have ever been spoken.  And for Dylan his journey has been rich and full, last night's celebration an empowering stop along the way.  Thanks RARA committee for a glorious evening.