It is rare that I write two blogs on the same day, but I can't resist in this case, as capturing the impressions of the winterPLAYLAND down at the Snye, while they are fresh in my mind, is important. 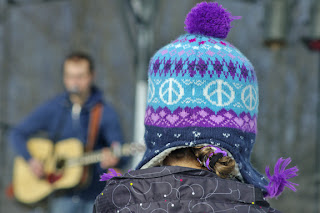 During the warmer months, a bastion for boaters, rowers, watercraft enthusiasts, and persistent fisherman (like me), the Snye, frozen over with two or three feet of solid ice is now home to a multitude of hockey rinks, ice sculptures, a snow maze, snow boarding hill and myriad tents, stages and other attractions.

We are into the final swing of the Syncrude winterPLAY Festival, western Canada's largest celebration of winter.  This year's eclectic variety of performances and activities, ranging from the African Guitar Summit to a sno-pitch tournament, are the brainchild of David Whitelock, new Executive Director of Events Wood Buffalo, producer of the event.

It has been more than a few late nights and additional grey hairs for the new leader of an organization that I was intimately familiar with, in all its various iterations, for over 15 years.  Trying to manage a three-week event in multiple locations with unpredictable weather and disparate venues would be daunting for a longtime executive director, but especially so for a guy who landed in Fort McMurray in the second week of November. 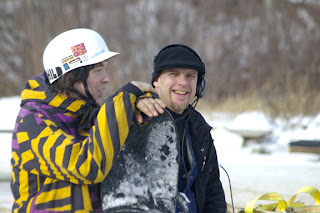 As he leaned against a trailer between the snow boarding demonstrations and the main stage, I got the sense that while the past three weeks have been physically and emotionally onerous, David is still having fun and embracing the many successes and lessons learned. 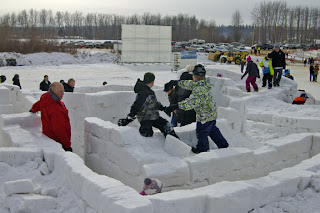 Standing up on top of the snow maze, while Ben ran around frantically chasing a buddy from school, I felt like I was seeing a glimpse of the future.  If everything goes according to plan, an iconic pedestrian bridge will soon arc across the Snye, roughly in this location, connecting the fantastic new facilities coming to MacDonald Island with a possible Civic Centre at the heart of an improved waterfront district.  I see thousands of people enjoying an idyllic winter's day as part of this winterPLAY Festival tradition that will grow into an event that is as a part of our culture as Carnaval de Quebec is to that province's capital city.  Perhaps one day we can become sister events, offering world-class winter celebrations to the world, east and west.

"The only mistake we can possibly make is to think too small," said Councillor Allan Vinni, the most resonant and sustaining comment that I've heard in a long time.


The ice sculptures reflect the beauty and wonder of life in the north.  One after another, guests pose in front of their favourites - the majestic bear, elegant eagle, cunning cougar - certain to share these frozen creations with family and friends from all over the globe. 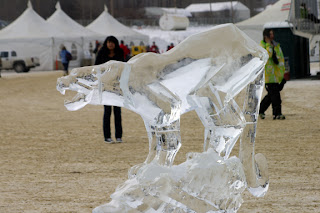 "The investment you guy made in making these ice sculptures is going to pay huge dividends in terms of promotional value," I said to Ray Floyd, the Vice President of the Events Wood Buffalo board.  His wife Marsha was eager to get a few snaps to send down to her grandkids in Texas.


We started winterPLAY about five years ago, initially as a one-act play festival in association with the Alberta Drama Festival Association. One day grew into two then three before exploding into the 10 day extravaganza the region enjoyed last year.  The theatrical component that spawned this celebration remains, and in fact continues to grow, with six one act plays featured this year in a tent venue nestled on the ice along the southern shore of MacDonald Island.

While there have been a few low points along the way - performances that were sparsely attended and some attractions that didn't transpire exactly as planned - overall, the 2012 Syncrude winterPLAY Festival has to be considered a success.  For me, the manifestation of the winterPLAYLAND on the Snye will be the picture that sits in my brain as we imagine the future and what this extraordinary celebration of the season will become.
Email Post