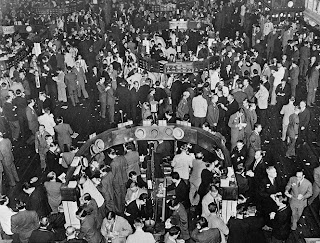 We began trying to recreate the stock market crash of 1929 at last night's rehearsal for The Farnsworth Invention.  In many ways, I wish our audience could peer through the fourth wall and observe this process.  Without set, costumes or lights, this ensemble jumps into the frenetic mood that descended on Wall Street on that fateful day which in many ways defined the century.

Director Claude Giroux does an initial blocking (where and when the actors move) on paper as part of his preparation process, long before we reach the rehearsal stage.  In his mind's eye he can see the effect he is trying to create and with actors on set (taped out on the floor) begins to give specific directions for everyone.  It's a laborious process, but it works.  All of a sudden, the New York Stock Exchange comes alive in the Rehearsal Hall at Keyano College.  It's fun to watch.

I have loose connections to most of the cast members of this show, which is to say they are on my Facebook.  We have a vague awareness of each other but not much beyond that veneer.  One of the great joys of this process for me is slowly getting to know this extraordinary collection of theatre artists, a healthy mix of both students and community members.

I've been a fan of Adam Zacharias for a number of years, but we've never had the opportunity to occasion to chat.  A Westwood graduate, Adam went through our Drama program at Keyano and hopes to pursue a career as a voice artist.  I think that's pretty cool.

Adam is one of about 20 in the ensemble who inject rehearsals with incredible focus and energy.  I would guess that most of the general public would have no idea how much time and effort goes into the creation of a Keyano Theatre Company production.  In an average week, as many as 30 hours are spent doing scene work.  Add in the time required to research and learn lines and you're essentially looking at a second full-time job for many of us.

I've said before that The Farnsworth Invention is one of the best plays that I've ever read.  But seeing it leap off the page is something entirely different.  I hope you will join us to see the finished product at the end of April.
Email Post