Just a few short hours ago, I had no idea about Joseph Kony or the Kony 2012 video that is sweeping through Facebook.  It started popping up with increasing frequency yesterday afternoon including a personal note from someone urging me to take 30 minutes to watch the mini-movie on YouTube.  After dinner I saw a post from my brother and sister-in-law - the tipping point for me - as I moved from skeptic to observer. 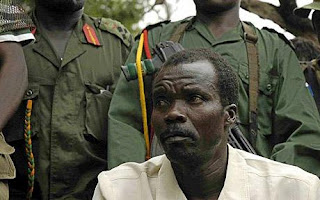 Joseph Kony is a terrible man who, for no apparent reason, has been stealing, raping, abducting, maiming, mutilating and killing in central Africa for over 20 years.  He takes young boys and forces them to become soldiers, doing things that would be unimaginable to most of us. The aim of the Kony 2012 campaign is to keep this degenerate monster on the forefront of the minds of American decision makers so they continue supporting the deployment of military advisers to that region to assist local authorities in the tracking and apprehension of the person considered to be the number one war criminal in the world right now.


The video produced by Invisible Children Inc is spreading like wildfire, inspiring over 30 million views on YouTube since it was released on March 5th, just three days ago.  I tried to get on their website last night, but the traffic must have been too intense.  It was a little easier getting on there this morning, while most of America was still sleeping. 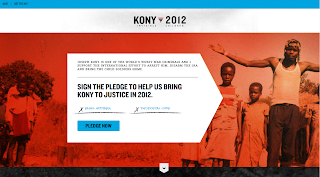 I understand that this campaign is going to have detractors.  Fool us once, shame on you; fool us twice, shame on me.

We grimaced when we began finding out about the inconsistencies of Greg Mortenson and his campaign to build schools in the mountains of Pakistan as he was accused of using literary license in crafting his best-selling book Three Cups of Tea.  We have heard and seen multiple tales of dramatic causes that turned out to be veiled grabs for money.  The folks behind Kony 2012 are going to endure a lot of this skepticism over the next few weeks, as we have been trained to mistrust, question, and think twice before jumping on a humanitarian bandwagon.

I'm not going to go out on a limb and plant my flag on either side of this movement, though my glass-is-half-full tendency leads me to feel that this is a legitimate cause.  More importantly, I'm fascinated by its execution and viral nature.  The minds behind Kony 2012 get it: social media can change the world.  And in the case of Mr. Kony, social media has the capacity to flush out this murderous imp in a way that no army or covert military force can match.

What did they do right?

1.  Compelling message - the 30 minute video was brilliantly produced.  It effectively inspires a shared vision of the WHY.  WHY do millions of people around the globe need to rise up and squash this bug?  The use of the filmmaker's son is a stroke of genius, tapping into the power of our children to help elevate the message to a completely different level, unreachable if you only appeal to adults.

2.  Infrastructure was ready - they waited until everything was prepared behind the scenes to maximize the attention that the release of the video would cause.   The call to action is simple, compelling and focused, with everything moving toward April 20th when the movement will reach its apex.  Posters, wrist tags, action kits, must have been years in the making.  They were patient, as they knew their success would be predicated on the follow-through piece.

3.  Lobbying works - the effort to get US authorities engaged in ending this nightmare has been going on for years.  Long before this video narrative was pieced together, advocates were meeting with lawmakers, politicians and business leaders, talking about the WHY.  Kony 2012 is really the icing on the cake, the final push to justice being served.

4.  They made it personal and local - who can watch this video and not think about their own children, either being abducted and forced into this madness or being at the receiving end of a machete? Honestly, by the end I wanted to order the action kit and block out April 20th so I could help cover the night right here in Fort McMurray.  Making it matter here at home and communities across the world was a great move.  Someone has already created a Kony 2012 Facebook event with over 1,200 people in the affirmative that they will participate.

5.  They are leveraging celebrity - organizers have tapped into the most influential celebrities of the day, realizing the galvanizing effect that an Angelina Jolie or George Clooney can have on spreading a message, creating a movement.

6.  They've created an end date - organizers harnessed the power of urgency, putting a definitive time frame around the campaign and the supposed life of the video. "This video is going to expire on December 31st, 2012." 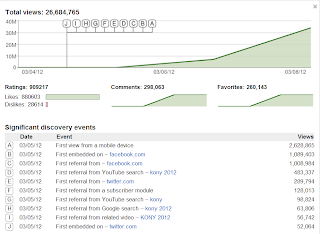 If you look at the YouTube statistics, Kony 2012 really took off on Tuesday, attracting about 10 million views.  But it completely exploded yesterday with well over 20 million hits.

"Right now there are more people on Facebook than there were on the planet 200 years ago," begins narrator Jason Russell in the Kony 2012 video, articulating the reason why and how social media has such incredible power. 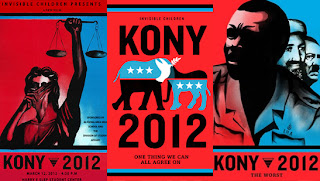 "Humanity's greatest desire is to belong and connect."

I think humanity also desires to do what is right.  Organizers of Kony 2012 are counting on it, and so are the lost children and their families.
Email Post