You can tell when an audience is engaged.  They lean forward in their chairs, focus their eyes on the speaker, and ask remarkably astute questions.  That is what we experienced last night as we held our annual Leadership Wood Buffalo information evening at the Merit Hotel.  An event that has been consistently growing in popularity over the years, what used to fill one banquet room now fills the better part of two. 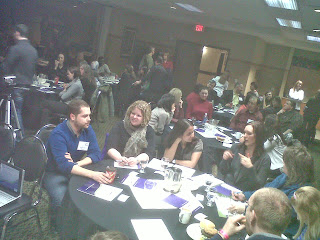 Even with our very busy lives, it was great to see so many alums in the room and a strong contingent from the current class of this community leadership development program.  We are also very fortunate to have strong board and committee members who offered their support and experiences to the large gathering of prospective candidates for 2012-2013 class.

"How many people here thinking about applying for Leadership Wood Buffalo are from the nonprofit sector?"  I asked.

A smattering of hands hesitantly rose into the air.

"How many are from industry?"

Many more hands shot up.

"How about the public sector?"

An equal number identified themselves.

"With such strong interest from industry, what kind of support do you get from the companies?" asked one of the attendees who works at site.

Having that early support enabled the original movers and shakers of the program to get things going a full year earlier than planned.

"Initially we were targeting a launch in the fall of 2007," said Ed Kamps, board director and founding Chair.  He described finding themselves in the sweet spot in the summer of 2006, realizing that if they moved forward quickly enough, it would be possible to get started in September.  They did and the first class began their community leadership journey a few weeks later and graduated in May of the following year.


Since that very first cohort, of which I was a proud member, over 100 people have graduated with many taking their places in leadership positions throughout this community, and other communities across the country. (see the complete list here)

"We recognize that some of our grads have moved on to new opportunities," said Kamps.  "But many have connected with other community leadership programs, continuing their journeys."

As Ed talked about the origins of the concept of community leadership, he focused in on ancient Greece and the city of Athens.  Images of Ian Hill speaking to a full room of over 400 delegates at the Leading the North Conference started flashing in my mind. 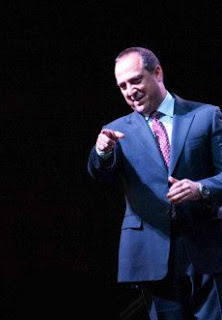 "If Athens shall appear great to you, consider then that her glories were purchased by valiant men, who understood their responsibility and who acted on their duty" - Pericles of Athens.

Ian has this quote at the top of the website he created following his rousing presentation in Fort McMurray.  He has a terrific two-page article there called Leadership in Changing Times.  Read it.

As it became clear last night that once again the Leadership Wood Buffalo program may not have enough seats for the number of folks interested, several people began to express a sense of desperation and dread.

"If we don't get selected, what mechanisms are in place to harness our energies and passions?" asked one LWB hopeful.  Short of providing answers to that question that will hopefully come out of our upcoming strategic planning process, I would suggest three things:

It was inspiring to meet a number of new people last night who came up wanting to chat after the formal portion of the information event.  I could see the light in their eyes and sense the fire in their bellies, eager to embrace this program that has embraced so many others in the relatively short period of time that it has been in operation.