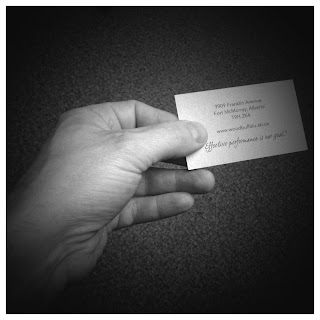 I sat in Starbucks yesterday afternoon waiting for a meeting that never happened.  It was a perfect time to ponder what I will say when we talk about networking as part of an Effective Advocacy Workshop we're doing on June 19th.  I will be joined by Christine Burton (Councillor, Lawyer, Business Owner), Krista Balsom (Publisher and Political Organizer), and Connie MacDonald (Nonprofit Sector Link).

The idea for the workshop fell out of the YMM Convergence event when it became clear that this was an area of stress and uncertainty for professionals working in the social profit sector and volunteers sitting on boards.  How do you get in front of the right people, at the right time, in the right way, to advocate for what your organization needs?

Kim Nordbye with Social Prosperity Wood Buffalo keeps bringing us back to relationships, as being one of the core pieces of our business that we need to apply some focus and intention.  I agree with her.  To that end, I've put together 10 ideas or tips that could eventually make a world of difference in your effectiveness in this area, whether you're working in the social profit sector, in sales or business, or in any other role that could benefit from developing excellent connections with people that you don't know, or people that you only know a little.

In most professional circumstances, an exchange of business cards is normal operating procedure.  The magic happens with what you do next.  If you have a drawer, or a little box tucked away with your precious collection of cards that you quietly say to yourself that you will follow-up up with later, YOU WON'T.  When you get a card, you need to use it.  Get that contact information into your system as soon as you get back to the office, or when you have a free moment or two on your mobile device.

In the early stages of any conversation you want to find areas of common interest.  Asking leading questions can help move this along more quickly.  Where are you originally from?  How long have you lived here?  What did you think of the hockey game last night?

Through this process I've made incredible connections.  For instance, I discovered that a former Alberta Energy Minister grew up in a small town very close to my own.  I later found out that his late uncle was a labourer on my grandfather's farm in the 1940s and that he had built my dad, then a small boy, a wonderful wooden play pistol.

Search for the common ground. You might be pleasantly surprised where it takes you.

I heard someone say at a recent conference that it is a good idea to pledge to reach out to a new connection in the next six months.  No!!!!!!!  I almost lost my mind.  No! The time to reach out to a new connection is right now, the same day, while they might still remember who you are and where you ran into them.  I doesn't have to be much, just enough to take the relationship to a slightly higher level.

It was great to meet you at the conference today.  I was delighted to hear that you're also from Saskatchewan. Good luck with that project you were telling me about.  I'm sure it will be a great success

LinkedIn is an excellent space to make an additional connection point.  In fact, it is not only accepted, it is increasingly becoming expected.  It also serves as an excellent connection back-up system in case people change jobs, get fired, or lose their email contacts during a BLUE SCREEN OF DEATH episode.

If you're on Twitter, go and find out if that other person is in that space.  If they have a common name, it might be difficult to find them by searching on Twitter.  However, if you google their name, company and Twitter, you often get lucky.  When they get that notification that you are following them, that immediately strengthens the relationship.

Sending a friend request on Facebook is a little trickier.  Don't assume that this is going to be perceived as a good thing.  Some people still use their Facebook world as a family and friends space.  They get annoyed when "strangers"ask to get it in. So tread carefully before hitting that Friend Request button. Listen for clues as to whether they are interested in engaging in this way.  If they are, it can be the most powerful relationship-building-at-a-distance-tool you can access.

FIVE | Watch for CUES, get in, get out

People of influence are adept at moving from conversation to conversation in a way that I greatly admire.  Politicians are extremely savvy in this regard, as are senior executive that I know from the oil sands companies we work with frequently.  I admire them for their ability to work a room, having one authentic engagement after another and making it seem easy.  You can help them.  Get in, introduce yourself, make some gregarious small talk, make them laugh, tell them a little about your area of interest, ask them about themselves and how things are going with their company, and get out.  They will give you clues, so watch for them.  If they check their watch (or God forbid, their mobile device), or if they start looking over your shoulder, it might be time to wrap things up.

SIX | Leverage the Law of Reciprocity

Dr. Robert Cialdini wrote the book on influence, literally.  He is featured on a SUCCESS Magazine audio CD talking to Publisher Darren Hardy, a conversation that I have listened to many times over.  He talks about being in a social situation and not doing what we've been taught, which is to ask ourselves: "Who can help me here today?" Rather, he suggests, ask yourself: "Who's business circumstances can I elevate here today?"  In other words, showing authentic interest in what matters to the personal of influence that you are speaking with, is an excellent way of forming a connection.  And if you discover something, or some way in which you can assist them, or support their efforts, then you've tapped into the law of reciprocity which basically says that "if I do you a favour, you owe me a favour."

SEVEN | Walk a mile in their shoes

This law connects very closely to the one above, but takes it one step further.  Taking the time to try to understand the world from their perspective will give you a powerful vantage point to understand how they might be able (or not) to support your efforts.  You might not be getting the answer you desire on a particular issue, but if you take the time to try to understand it from their side, you might build additional trust, respect and connectivity that could lead to a work-around solution.  Empathy is an awesome networking tool.

EIGHT | Get the name right

People value having their name said and spelled correctly.  Don't be afraid to ask them to repeat their name a couple of times to cement its pronunciation in your mind.  On many occasions, I have connected with people who have particularly difficult last names.  In each case, I take the time to work with them on the pronunciation.  In every case, they appear to sincerely appreciate the effort and attention. The same goes for spelling.  Check and double-check when you send that email later in the day.  Getting it right matters.

NINE | Be respectful, full of attention and INTENTION

This one may seem like a no-brainer, but you'd be shocked to know the situations that I've been in with people of the highest level of influence, when other folks are playing on their iPhones and mobile devices and not even making eye contact.  It's easy:  look the person in the eye, listen to them intently, ask pertinent questions, give them your full attention and intention.  In a situation where you're sitting around a table and a person of influence is speaking, they will always seek out the person who is intently listening and making eye contact.  I can't recall a single situation when this wasn't the case.

TEN | Be proud and passionate; Be MEMORABLE

Your ultimate goal is to be remembered.  How do you do that?  Simple.  Talk with passion and precision about what matters to you in your life, whether that is something with work, in the community or with your family.  There are a number of recent engagements I've had that immediately pop to mind when they left an indelible impression: the former heavy metal star turned insurance agent who said "I absolutely love what I do",  the business owner who was describing how much fun he was having building his scaffolding company, or the St. Albert MLA describing his first canoe trip of the season with his sons.

It was Robin Sharma who said - also on a SUCCESS CD - that "it is the little things done consistently that make the biggest difference."  If you make the commitment to integrate these 10 Immutable Laws of Effective Networking into your life, over time they will fundamentally change the quality and quantity of your professional relationships.  I guarantee it!